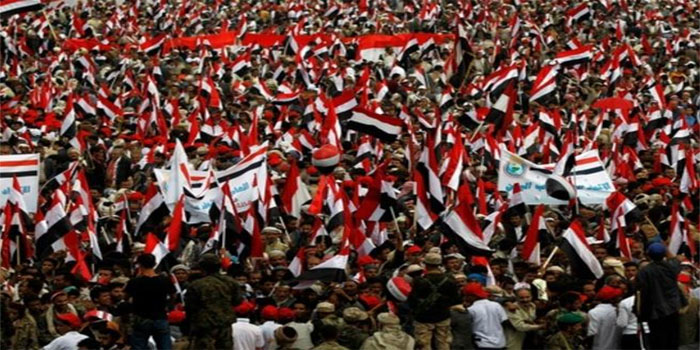 Political factions in Yemen have expressed full support for the newly-formed “national salvation government”, vowing to help the administration accomplish its political, economic, security and military tasks for a final popular victory.

In a ceremony marking the 49th anniversary of South Yemen’s independence from the British colonial rule in the capital Sana’a on Wednesday, the parties voiced their readiness to cooperate with the new government.

Head of the Supreme Revolutionary Committee Mohammad Ali al-Houthi hailed the ceremony as a sacred occasion for the Yemeni people, saying it inspires the public to stand firm against any act of aggression on their beleaguered country.

President of the Karamat party, Abdul-Malek al-Hujari, also pledged support on behalf of all Yemeni political factions to the Supreme Political Council — a coalition between the Houthi Ansarullah movement and former president Ali Abdullah Saleh’s General People’s Congress party, lauding the formation of the new government.

Hajari further underlined that his party will spare no effort to assist the salvation government advance its plans.

On Tuesday, the new Yemeni government was sworn in after the Houthi Ansarullah movement and their allies announced its formation.

The national salvation government is to replace the Supreme Political Council. It is tasked with running Yemen’s internal affairs and dealing with Saudi Arabia’s aggression against the impoverished nation.

The new government, led by the former governor of Aden Abdul Aziz Bin Habtoor, has vowed to help UN efforts restore peace and stability in the country.

Habtoor has described the formation of the ruling structure as a vital step in the administration of domestic affairs, asserting that Saudi crimes against Yemeni people would not go unanswered.

The sheer number of the operational sorties conducted by the Saudi military since March 2015, namely 150,000, was a testament to the true nature of the Saudi aggression, he said on Tuesday.

Saudi Arabia has been engaged in a deadly campaign against Yemen since March 2015 in an attempt to bring back the former Yemeni government to power and undermine the Houthi Ansarullah movement.

The impoverished Arab country is grappling with the scarcity of food supplies and outbreak of diseases amid Saudi Arabia’s airstrikes.