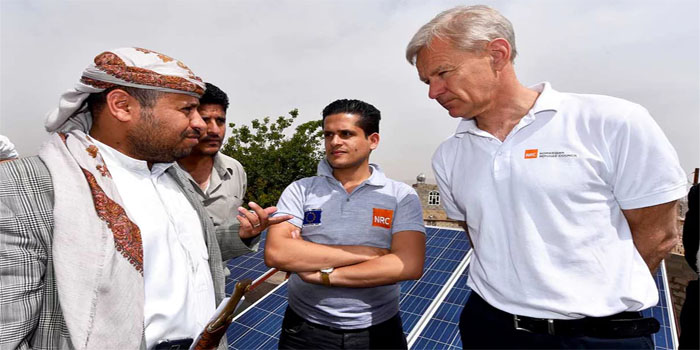 One of Europe’s most experienced diplomats has said he was “shocked to the bones” by the hunger he saw in Yemen.

Jan Egeland, the current head of the Norwegian Refugee Council, condemned “this gigantic failure of international diplomacy” and said that only 3 million people out of the 7 million people who were starving had been fed last month.

“Men with guns and power inside Yemen as well as in regional and international capitals are undermining every effort to avert an entirely preventable famine,” he said, “as well as the collapse of health and education services for millions of children.”

In April, the World Food Programme could only afford to feed 3 million men, women and children in Yemen – a country said to be on the brink of famine – due to a lack of resources and the late arrival of food shipments, the organisation said.

The secretary general of the NRC is on a five-day visit to the country. “I am shocked to my bones by what I have seen and heard here in war- and hunger-stricken Yemen. The world is letting some 7 million men, women and children slowly but surely be engulfed by unprecedented famine. It is not a drought that is at fault. This preventable catastrophe is man-made from A to Z.”

An estimated 19 million people in a country with a total population of roughly 27 million are in need of some form of aid, according to the UN. The price of basic commodities has risen by a third.

Egeland said he met teachers, health workers and engineers who had not been paid for eight months and were struggling to survive.

He said: “An aid worker told me the fear and desperation among civilians is now so great that mothers with acutely undernourished children grab their kids from hospital beds when they hear the war planes flying over.”

The food crisis in Yemen has been made worse by the continuing conflict between the Houthi rebels who control Sana’a together with former president Ali Abdullah Saleh – who led the country from 1990 to 2012 – and forces loyal to the ousted president, Abdu Rabbu Mansour Hadi. Since March 2015, Saudi Arabia has led US-backed military intervention in Yemen aimed at reinstating Hadi, who lives in exile in Riyadh, and countering the advances of the Iran-backed Houthi forces.

Egeland appealed to the parties of the conflict to agree a ceasefire and to keep the the main humanitarian supply route, the port of Hodeida, open. There have been warnings of an attack on the port by the Saudi-led coalition.

He said: “Nowhere on Earth are as many lives at risk. We are not even sure that the main humanitarian lifeline through the port of Hodeida will be kept open.”

Activists on the ground have warned that relief is being prevented from reaching its recipients.

António Guterres, the UN secretary general, has warned that Yemen is facing a “tragedy of immense proportions”, with a child under five dying of preventable causes every 10 minutes on average.

At a pledging conference in Geneva last week, governments and international donors promised the UN $1.1bn (£850m), half of what the organisation says is needed to prevent famine in Yemen.

However, UN officials said the pledges need to be urgently committed to cash if they are to continue feeding the 7 million people said to be on the brink of famine.

George Khoury, head of the UN’s Yemen Office for the Coordination of Humanitarian Affairs, said that pledges take time to transfer into cash in the bank accounts of agencies.

“It’s only been a few days,” Khoury said. “It takes time. The majority of the money is still in pledges.

“The problem from our side is that we need the money now. Not in August or September. If the World Food Programme does not get the money now, there will be a break in the food pipeline by the beginning of July. Every month we are expected to feed 7 million people. Last month, the WFP reached 3 million, because of lack of resources.”

Delayed food shipments into Yemen, a country that relies on imports, was another significant factor affecting the number of people WFP could reach, the agency said.

In May, WFP hopes to reach 6 million people who are severely food insecure, but the organisation will have to cut rations for 4 million of them by 60% in order to do so.