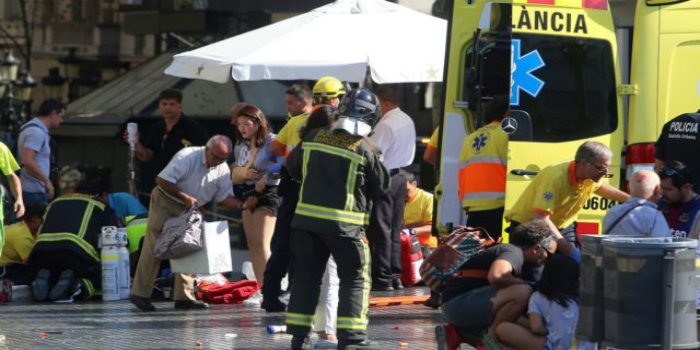 In recent days, Moroccans have been taken aback by the publication of media reports that state, both directly and indirectly, that Morocco has become a “breeding ground” for terrorism. Fortunately, this recent reporting stands in stark contrast with reality, according to a number of studies documenting the kingdom’s successes in championing the fight against extremism and terrorism and lauding the country for its religious tolerance.

While Spanish media have, for the most part, responded accurately and professionally to the Barcelona attack –the news site El Español, for instance, published a report on Morocco’s “Mossalaha” program fighting extremist ideologies in prisons and reintegrate prisoners into society – some British and Dutch publications have resorted to sensationalism and finger-pointing. Instead of addressing and analyzing the social and economic models prevailing in Europe, as well as the discrimination faced by Muslims in the continent, as possible factors responsible for radicalization, these media outlets shallowly speculate and make poorly thought-out accusations toward external factors as the cause for these acts.

It must be said that no terrorist attack has taken place in Morocco since 2011. In contrast, many European and other North African countries continue to be shaken by terrorist attacks. The vigilance of Moroccan intelligence services has enabled the country to thwart 341 terrorist attacks since 2002 and dismantle 167 terrorist cells, 46 of which were associated with ISIS. This is not the hallmark of a terrorist breeding ground.

The efficacy of Morocco’s efforts to thwart terrorist acts and reduce the threat of terrorism has been praised on several occasions by the US State Department. As recently as last July, the 2016 State’s Country Reports on Terrorism stated that, in addition to its effectiveness in “mitigating the risk of terrorism, detecting terrorist financing, aggressively targeted and effectively dismantled terrorist cells within the country by leveraging intelligence collection, police work, and collaboration with regional and international partners,” Morocco has “a comprehensive strategy for countering violent extremism that prioritizes economic and human development goals.” The report noted also that Morocco maintains “tight control of the religious sphere.”

Indeed, Morocco’s effectiveness in mitigating the risk of terrorism earned it the moniker by Time Magazine as the “Last Haven in North Africa.” The past two years have demonstrated that Morocco’s intelligence services played a key role in aborting terrorist attacks in several European countries, including France, Spain and Denmark.

In light of these successes, of which many Western media publications are either unaware or conveniently ignore, they should perhaps question why despite the sophisticated technology of European countries, their intelligence services have failed to protect their people and in many cases relied on Morocco’s intelligence to thwart imminent terrorist attacks.

Perhaps a more fundamental question that bears on the core of radicalization is why their countries have failed to fully integrate immigrants living on their soil as full-fledged citizens who feel they are just as French, Spanish or Dutch as any other citizen whose name is not Mohammed. Is it time for these countries to reevaluate the way they look at Muslims and Arabs? Should second-, third-, or fourth-generation sons and daughters of immigrants continue to be looked upon as foreigners who will never make the cut as a full citizen, for the simple reason that they embrace a different religion and come from a region that had been held for centuries in contempt?

One of the reasons that Morocco has been successful in stemming the spread of extremism is its control of mosques and the messages spread inside of them.

Western governments should be held accountable for their glaring failure to have tight control over their mosques. For far too long, European countries have failed to come to terms with the fact that their Muslim community is there to stay and the subsequent need to manage and support its places of worship.

For many years, the Spanish government has ignored the demands and warnings of the Muslim community and fallen short of addressing Islamic cults in Spain or launch training programs for Imams. Th vacuum in leadership has been exploited by extremist group which now flourish throughout the country and spread their ideology away from the control of any religious or government authority.

It is no coincidence that many of those who committed the Barcelona attacks frequented the sermons of the same self-proclaimed extremist Imam who had served a prison sentence in Morocco for drug dealing before he emigrated to Spain. The lack of vigilance of Spanish authorities and their inability to monitor the practice of the Islamic faith by appointing full-fledged Imams paved the way for the emergence of impostors who found no difficulty in spreading their message among the most vulnerable and those who are prone to radicalization and indoctrination.

Perhaps it is time to reevaluate western governments tolerance of Saudi Arabia’s building and funding of mosques all across Europe. Multiple studies and reports have shown that the main cause behind the spread of extremism and terrorism in Europe and elsewhere is the result of the hundreds of billions of dollars Saudi Arabia has spent since the early 1950’s to build mosques across Europe to spread its Wahhabi ideology that is at odds with the true values of Islam championed by Morocco and its king.

The example of Spain is very telling. While the Spanish government finances the Catholic churches through a special mechanism called Fundación Pluralismo y Convivencia, no funds are made available to funding the construction or maintenance of mosques. The absence of the state’s contribution to the institutional structures of the practice of Islam opens the door for foreign countries such as Saudi Arabia to finance the construction of mosques. Cases in point are the mosques of Seville, Malaga, Fuengirola and Marbella, which were built by the Saudis and are under the control of the Saudi who run them and appoint the Imams who lead the prayers. One can only guess what kind of message is spread in these mosques.

According to Spanish newspaper ABC, there over 800 informal mosques in Spain, which are mainly funded by members of the community. The absence of support from the government forces the Muslim community to hold its prayers in places that are not officially recognized as places of worship, including garages and warehouse.

The situation does not only favor the emergence of self-proclaimed Imams, who might spread the ideology of hate, but also creates frustration among members of the community who may feel alienated, frustrated and blame the state for not considering them as full-fledged citizens with the same rights and obligations as other Spaniards.

Moreover, for many years the Spanish Federation of Islamic Religious Entities (Federación Española de Entidades Religiosas Islámicas) has urged the government to provide them with appropriate places of worship, to supervise the appointment and training and Imams and make sure they are fluent in Spanish and spread a message that is compatible with Spanish society. Unfortunately, their calls have fallen so far on deaf ears.

Learning from the Moroccan Example

The Spanish government should make the Barcelona terrorist attack a turning point in its efforts to combat extremism and terrorism. It should take into consideration the demands of the Muslim community, which has long called upon it to manage and supervise the practice of the Islamic faith in Spain.

Perhaps the Moroccan experience in dealing with mosques can serve an example to follow. Supervising the appointment of Imams and the message delivered inside mosques has been part of the multifaceted strategy Morocco has launched over the past decade to stem the propagation of extremism and mitigate the risk of terrorism. Spain could follow in the footsteps of many countries, such as France and Belgium, to train their Imams in the Mohammed VI Institute for the Training of Imams. The training of Imams could become another collaboration in the successful cooperation between Morocco and Spain in counter-terrorism.

No matter how tight the monitoring of its Muslim community or how strong its cooperation with Morocco is, Spain’s counter-terrorism efforts will fall short of effectively preventing the occurrence of terrorists attacks on its soil as long as loopholes can be exploited by extremists to take control of mosques and spread their hateful ideology.