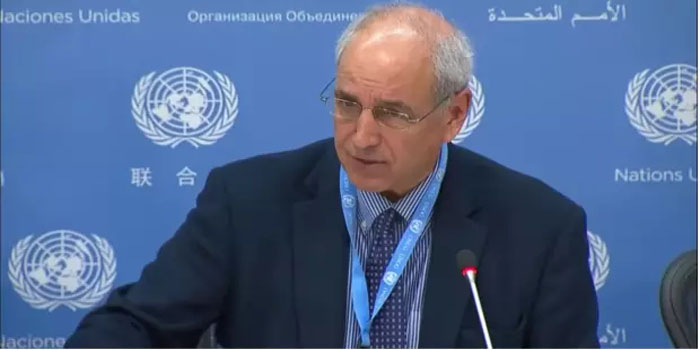 Israel is violating the international Convention on the Rights of the Child by detaining a Palestinian teenager for slapping an Israeli soldier, UN human rights experts said on Tuesday.

After an incident in which she slapped an Israeli soldier, Ahed Tamimi, 17, appeared before an Israeli military court on Tuesday.

The UN experts called for her release, saying that future hearings should be held in strict accordance with international legal standards.

“The Convention on the Rights of the Child, which Israel has ratified, clearly states that children are to be deprived of their liberty only as a last resort, and only for the shortest appropriate period of time,” said Michael Lynk, the special rapporteur on the situation of human rights in the Palestinian Territory occupied since 1967.

“None of the facts of this case would appear to justify her ongoing detention prior to her trial, particularly given the concerns expressed by the Committee on the Rights of the Child about the use of pre-trial detention and detention on remand,” Lynk said.

Tamimi has been held in detention since she was arrested at her home by Israeli soldiers last December when she was 16. Four days earlier, she was filmed physically confronting Israeli soldiers on her family’s property in Nabi Salah, in the occupied West Bank.

On 1 January, Tamimi was charged with a number of offenses under Israeli military law, some stemming from the December incident, and others dating back to last April. The court ruled that she should remain in detention until the end of her trial, due to reconvene in early March.

Questioned without her parents or lawyer

“Tamimi was arrested in the middle of the night by well-armed soldiers, and then questioned by Israeli security officials without a lawyer or family members present. This violates the fundamental legal guarantee to have access to counsel during interrogation,” said Jose Guevara, chair of the Working Group on Arbitrary Detention.

The UN experts also said that “her place of detention — Hasharon prison in Israel — [is] in violation of the Fourth Geneva Convention which states that the deportation of protected persons from occupied territory to the territory of the occupying power, or to that of any other country, is prohibited, regardless of the motive.”

“Figures from Palestine show that Israel detains and prosecutes between 500 to 700 Palestinian children in military courts annually,” Lynk noted.

“We have received reports that these children are commonly mistreated while in detention, subjected to both physical and psychological abuse, deprived of access to lawyers or family members during interrogation, and tried under a military court system in which there are significant concerns regarding independence and impartiality, and which has a worryingly high conviction rate,” he said.

The experts also called on Israeli authorities to respect and ensure basic due process rights, with particular attention to the rights and protections afforded to children, and re-emphasized their call for Tamimi to be released in line with these protections.