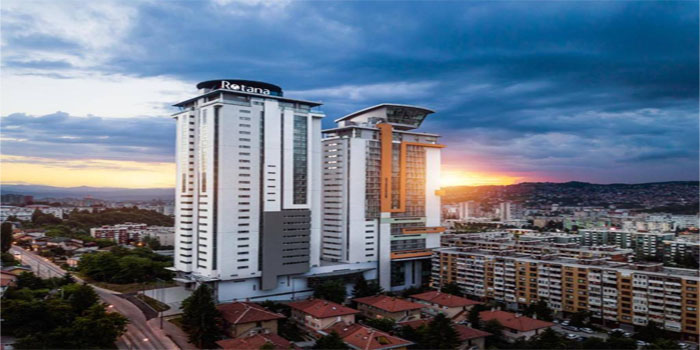 Abu Dhabi-based Rotana Hotels, a leading hotel management company in the Middle East, Africa, Eastern Europe, and Turkey, on Tuesday announced it has opened its first hotel in Bosnia and Herzegovina, Bosmal Arjaan by Rotana.

Bosmal Arjaan by Rotana, Bosnia and Herzegovina’s first-ever branded hotel apartments, features 132 fully serviced one-, two-, and three-bedroom high-end hotel apartments, according to a press release.
Located within Sarajevo’s Bosmal City Centre complex, the new hotel’s amenities include a stylish restaurant, two meeting rooms, and a modern fitness and wellness club with a gymnasium, a sauna, a Turkish bath, and multiple treatment rooms.

Each accommodation in the hotel has a fully equipped kitchen and is provided with the latest in-room technologies in line with Rotana’s exceptional hospitality and service standards.

Guy Hutchinson, Rotana’s acting CEO, commented: “The opening of Bosmal Arjaan by Rotana supports the diversification of hotel products in Sarajevo by bringing a new type of accommodation to this wonderful city.”

“Rotana is proud to contribute to the growth of Bosnia and Herzegovina’s flourishing tourism sector. We are pleased to play a part in the development journey of this dynamic market through our policy of hiring, training and developing the local talents to deliver an outstanding guest experience with our signature personal touch,” Hutchinson added.

Rotana now operates in 13 countries and manages a portfolio comprising 113 hotels, including 46 hotels that are still under development.