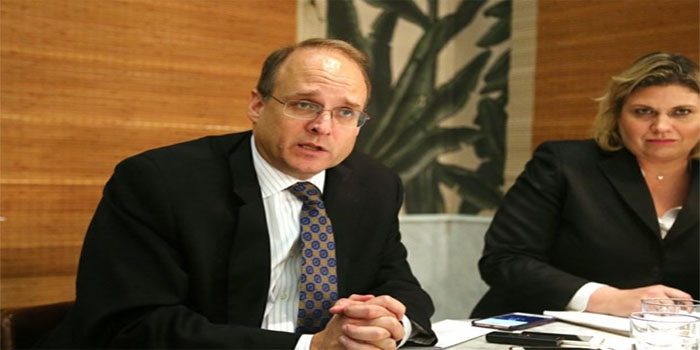 A member of the Trump administration expressed ironclad support for Lebanese state institutions Tuesday while pushing the anti-Hezbollah line.

Hezbollah “is a cancer at the heart of Lebanon,” Marshall Billingslea, the assistant treasury secretary for terrorist financing, told journalists – casting the armed political party as an extension of an Iran “determined to subvert the Arab governments throughout the region and undermine Arab economies.”

Offering soothing assurance, Billingslea insisted there were “no current plans to sanction Lebanese banks,” an ever-present worry in a country where banks hold half the public debt, sustaining the government and political status quo.

Instead, the official offered high praise for the country’s banking system. “I’m very pleased that in many cases the Lebanese banks go above and beyond … global standards in how they perform the due diligence.”

While noting that any coordination between the Army and Hezbollah – such as that alleged during the Fajr al-Joroud offensive against Daesh (ISIS) last August – would be “highly problematic,” Billingslea said the U.S. government views the Army as “the sole guarantor, the only guarantor of Lebanon’s territorial integrity and security.”

“We look for every opportunity to work closely with the [Army] and strengthen the [Army],” he added.

Since U.S. President Donald Trump took office a year ago, calls have grown for Washington to end its support for the Army, calling it a failed strategy to counter Hezbollah. Critics counter that, without American assistance to Lebanon, Hezbollah would be even stronger.

Billingslea was similarly firm on U.S. support for another pillar of the Lebanese system. Asked whether the Treasury Department has the authority to sanction Banque du Liban, Billingslea offered a strong response: “We have such an outstanding relationship with BDL, I can’t even fathom an alternative universe where that would be something that I would ponder.”

The message was clear: The United States does not want to destabilize Lebanon. “When you talk about treating a cancer, the last thing you want to do is kill the patient,” he said. The Treasury official also argued that the U.S. pursuit of Hezbollah financing made the country stronger and more stable. “We are determined to ensure that they [Hezbollah] are not able to undermine this phenomenal democracy in Lebanon,” he said.

Yet despite labeling Hezbollah “a terrorist organization with both Lebanese and American blood on its hands,” the official stopped short of calling for the Lebanese government to halt payments to Hezbollah ministers and MPs.

“This is up to the Lebanese government,” he said, but added, “Does it bother me that a Hezbollah member who happens to be in the Parliament can’t get a bank account? No.” Hezbollah has two Cabinet ministers and its parliamentary bloc has 13 MPs.

Referring to a Justice Department investigation announced Jan. 11, Billingslea said, “The matter of the involvement of Hezbollah personnel in drug trafficking was raised at nearly every meeting I had.”

While Billingslea said he was not in Beirut as part of that investigation, he said, “Increasingly we’re concerned about the amount of narcotics money coming into the country, as we know that there are certain Hezbollah components involved in the drug trade.”

Despite Billingslea’s reassuring words that there were no new sanctions planned against banks, he made no such promises about general sanctions. “We’ll never take that off the table. This is a constant campaign.”