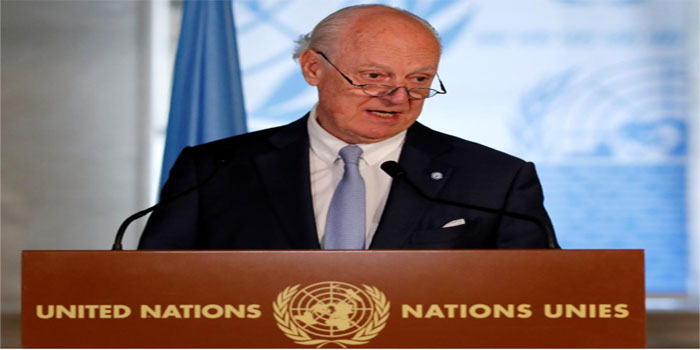 U.N. Syria envoy Staffan de Mistura has invited the United States and six other countries for talks in Geneva next month, a U.N. spokeswoman said on Tuesday, as the United Nations continues its push for a new Syrian constitution.

He plans to meet senior representatives from the United States, Britain, Saudi Arabia, Jordan, Germany, France and Egypt on Sept. 14, two days after he receives officials from Russia, Turkey and Iran for previously announced talks.
“This is going to be an opportunity to discuss the way ahead on the political process,” U.N. spokeswoman Alessandra Vellucci said.

A U.S. State Department official said the United States would be represented by James Jeffrey, the newly minted special representative for Syria, and Joel Rayburn, the administration’s special envoy for Syria.

De Mistura is tasked with forming a committee of Syrian citizens to draw up the new constitution, after receiving nominations from the Syrian government and the opposition.
The planned meetings follow a similar set of talks with both groups of countries in June, although Egypt was not involved in that round.

The discussions about setting up a constitutional committee have made slow progress and represent a big downgrade in the United Nations’ ambitions for Syrian peace talks.

For two years the warring sides repeatedly came to Geneva, in a futile search for agreement on political reforms, a new constitution and new elections.

But this year, with little U.S. political involvement and major gains on the battlefield by Syrian President Bashar al-Assad and his Russian and Iranian allies, the U.N. political process has largely evaporated.

The U.S. State Department official said the United States would remain engaged with the United Nations and other parties, including Russia, to encourage all possible efforts to advance the political process, and it supported de Mistura’s efforts to broker a political settlement.