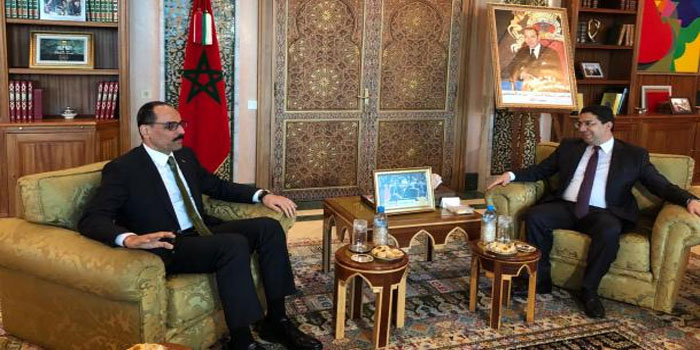 Turkey is one of the multiple countries that support Morocco’s territorial integrity. The country reiterated its support through the spokesperson of the Turkish president, Ibrahim Kalin.

Kalin, who held several talks with Moroccan senior officials said that Morocco’s territorial integrity and its stability is a strategic priority for Turkey.

The official who carried a letter to King Mohammed VI from Turkey’s President Recep Tayipp Erdogan, said that Morocco is a “of a paramount importance to “Turkey.”

After his talk with Bourita, the Turkish official emphasized the solid ties between the two countries, saying that his country is looking forward to strengthening its cooperation between the countries in all areas, including business and cultural fields.

“We are working to intensify our joint actions to bring bilateral relations to the level of a true strategic partnership in the years to come,” he said.

According to the Turkish Ministry of Foreign Affairs, diplomatic ties between both countries were “established on 17 April 1956 by a joint declaration of the Governments of two countries; following the proclamation of independence of the Kingdom of Morocco. Turkey considers Morocco as an important country in the Mediterranean region and North Africa.”

The ministry added that both countries “always” maintain good ties and are “mutually cooperating on many regional and international issues.”