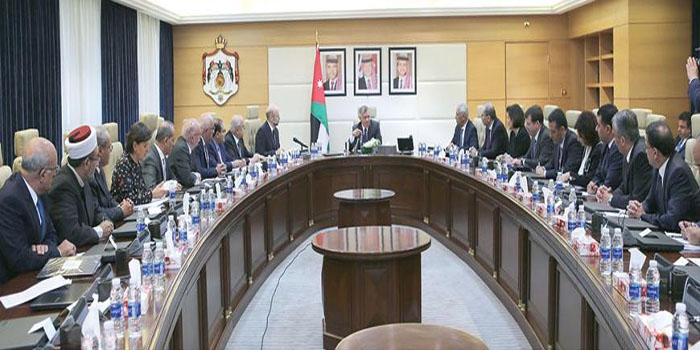 His Majesty King Abdullah affirmed on Sunday that officials are required to serve citizens and maintain direct outreach to the public to follow up on their concerns and needs.

Chairing part of a Cabinet meeting at the Prime Ministry, King Abdullah commended the government’s outreach efforts, stressing their importance and describing them as a sign of seriousness.
Commenting on economic conditions, His Majesty said government cooperation with all institutions is required to address the difficult economic challenges facing Jordan.

The King stressed that the government must focus on alleviating the burden on Jordanians, through coordination and field visits to keep abreast of the challenges facing the public.

Emphasising that Jordan will overcome challenges, His Majesty underlined that combating corruption is a key priority, expressing full support for anti-graft efforts.

The King praised the government’s seriousness in dealing with the tobacco case, which involves the alleged illegal manufacturing and smuggling of cigarettes.

The goal is to eradicate corruption and move ahead, His Majesty affirmed, stressing the importance of upholding the rule of law and reiterating that no one is above the law.

The King also commented on the spread of rumours and character assassination, calling for cooperation and further efforts to counter these practices.
Character assassination and attempts to stoke sedition are unacceptable, His Majesty underscored, emphasising the importance of transparency in combating poverty, unemployment, wasta (nepotism) and corruption.

The King affirmed that no one would be allowed to harm the interests of the nation and its citizens to serve some personal agendas.

His Majesty commended the efforts exerted by the government since its formation, expressing his full support.

The King also highlighted the recent visit to the United States, which included meetings in Washington, DC, with President Donald Trump, senior US administration officials, and members of Congress, noting Jordan’s clear and steadfast position on the Palestinian cause, which is based on the two-state solution that guarantees the establishment of an independent Palestinian state with East Jerusalem as its capital.

This is Jordan’s unwavering position, His Majesty underlined, stressing that there are no pressures on the Kingdom and dismissing rumours in this regard.

Also at the Cabinet meeting, the King highlighted the meetings held with leading businesspeople and officials in the United States, aimed at attracting investments to Jordan and creating job opportunities. Business leaders expressed their desire to invest in and support Jordan, which they are eyeing as a regional headquarter for their companies.

His Majesty said some procedures remain a challenge for investors, and this issue has been noted before, adding that work must focus on addressing this, as the priority is to combat poverty and unemployment.

For his part, Prime Minister Omar Razzaz voiced the government’s appreciation for the King’s visit, as it motivates the ministerial team to keep working seriously and devotedly on implementing the Royal visions to advance the development process and better serve citizens.

Razzaz stressed the government’s commitment to implement a number of reform programmes in its first 100 days, noting that his Cabinet would take several measures to stimulate economy and provide job opportunities for Jordanians “in a way different from the past”.

The government will also focus on improving services that are directly related to people’s lives, especially in the education, health and transport sectors, the premier said.

“Jordan has resources and capabilities that are not utilised yet, such as using state land in overcrowded regions to build housing units for young people at reasonable prices,” Razzaz said.
On building confidence between the government and the citizens, Razzaz said that his team would sustain field communication, create platform to receive complaints from citizens, and publicise decisions in a transparent manner to counter “tendentious rumours” and raise awareness of citizens about information sources.

He noted the vitality of various sectors to the Jordanian economy, including ICT, tourism and agriculture.

Deputy Prime Minister Rajai Muasher outlined the aspects of the dialogue that the government has launched on the draft income tax law and the tax burden.

He said that studies carried out by the government show that the tax burden has various drawbacks such as focusing on the sales tax on the expense of the income tax.

He said that sales tax is four times more than the income tax.

The deputy premier stressed that the government would take all proposals into consideration including cancelling the power of the Income and Sales Tax Department to prosecute suspects in tax evasion cases and shifting it to the prosecutor general’s office.

On the tobacco case, Minister of Finance Ezzeddine Kanakrieh said that the government is committed to take legal action against any suspected corrupt person .

For her part, State Minister for Media Affairs Jumana Ghunaimat pointed out the “massive” amount of information and rumours circulated daily on social media.

Ghunaimat announced that the government will launch an electronic platform named “you have right to know” with aim of providing information and responding to rumours and false news.

She stressed the importance of transparency in the provision of information and securing a sufficient space for the official narrative in “the virtual world”, which has become a main source of information.

She stressed the importance of implementing the principles of the rule of law to fight the illicit practices online, such character assassination and privacy violation.