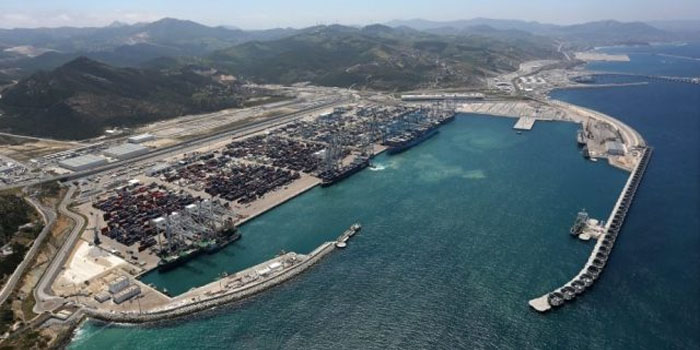 Morocco’s Tangier Med port exported MAD 139 billion worth of products in 2018, over 50 percent of all Moroccan exports, according to a statement published by Maghreb Arab Press (MAP).

According to the statement from the port authority, the volume confirms the port as the leading export site in Morocco and the biggest in Africa.

The port processed an overall tonnage in the past year of 52,240,806 tons, an increase of 2 percent compared to 2017.The port surpassed Durban port in South Africa by handling a total volume of imports and exports worth MAD 317 billion in 2018.

The two ports handled more than 3.4 million containers, an increase of 5 percent compared to 2017.

Tangier Med’s passenger traffic has steadily increased with a traffic of 2,802,108 passengers, a slight increase of 1 percent from 2017.

About 479,300 vehicles were handled at the two Tangier Med port terminals, an increase of 11 percent compared to 2017.

More than 383,700 vehicles were handled at the Renault terminal.

The statement added that the port recorded a total of 254,190 tons of imports, a decrease of 18 percent from 2017 “mainly due to lower cereal imports.”

The port authority added that liquid bulk traffic experienced a decrease of 21 percent compared to 2017. Liquid traffic recorded a total of 5,920,477 tons of treated fuels, which variation “is due to decreased imports, especially of fuel.”

In addition to the number of goods and vehicles, the press release said that 13,293 ships landed at the port in 2018, providing direct sea connections to 186 ports and 77 countries.