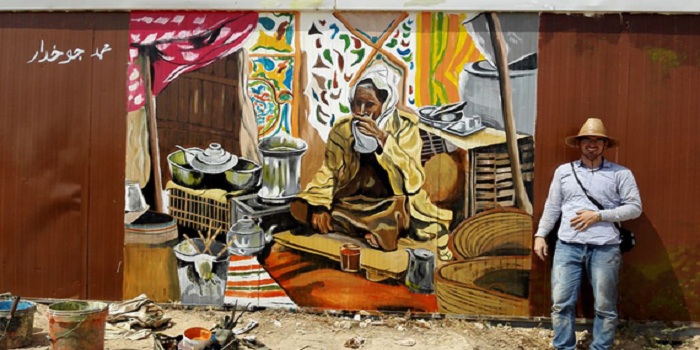 At the Zaatari refugee camp in Jordan, Syrian artists are using their paintbrushes to break up the monotony of the desert. They splash the container houses of Syrian refugees with flowers and trees that the desert climate does not support, with the hope of alleviating a little of the pain of the 80,000 refugees in the camp. Located some 53 miles northeast of Amman in Mafraq, Zaatari accommodates around 10% of the Syrian refugees in the country. There are 656,913 Syrian refugees officially registered with the UN High Commissioner for Refugees in Jordan. Jordanian authorities established the Zaatari camp on 8,500 dunams in July 2012 to shelter Syrians fleeing the civil war that broke out in 2011.

Muhammad Jokhadar, an artist who escaped Homs for Jordan in 2013, works as a barber at the camp, but that hasn’t stopped him from pursuing his painting. In mid-2016, he formed the Jasmine Necklace, a group of artists in Zaatari. The members of the group decided to try to counter the solitary, monotonous feel of the desert and came up with a volunteer initiative to paint the accommodations and other buildings in the camp with trees and other natural, colorful scenery. The Norwegian Refugee Council (NRC) liked the idea, and to promote it, paid the painters’ monthly salaries of $300 and provided the necessary equipment.

Many of the refugees had been accustomed to green spaces and other natural scenery in their hometowns. According to the Food and Agriculture Organization, agriculture generally constituted 26% of the Syrian economy, while Jordan has experienced declining vegetation. The study Desertification in Jordan, conducted in June 2016 by the International Union for Conservation of Nature, indicated that 81% of Jordan’s 89,342 square kilometers is desertified, while an addition 16% is threatened with desertification.

Jokhadar told Al-Monitor, “Fifteen Syrian artists living in the camp participated in the initiative to decorate it. They divided the camp into 12 parts, each of which was painted in a certain color referring to the region the refugees came from. Green prevailed among the paintings, reflecting Syria’s green spaces.”

The artists’ did not, however, limit themselves to trees and plants, Jokhadar said. Some chose instead to paint Syrian archaeological sites to introduce visitors and a new generation of Syrians to their country’s culture.

In addition, Elias Abu Ata, regional communications coordinator for the NRC Middle East, told Al-Monitor, “The initiative that the council supported aimed at raising awareness about issues related to water consumption rationing, education, sports and other [things]. It also facilitated painting the 12 neighborhoods of the camp with different colors to set them apart.”

Mohammed al-Amari, a plastic artist in the Zaatari camp who fled Daraa for Jordan in 2013, painted with the NRC program. After the project ended, he continued to voluntarily paint around the camp with other artists.

“The NRC adopted the initiative for Syrian artists to paint on containers and paid them in return for painting,” Amari explained. “Five months later, after the aid period ended [in December 2016], the artists continued to paint gratis for the refugees.” He said they focus on families facing tough economic situations in an attempt to lift their spirits.

Jokhadar commented, “The refugees welcomed us and gave us food and beverages. They were racing to ask us to paint their trailers.”

Jordanian authorities do not allow refugees in camps to bring in cement material for building, so the refugees live in containers made of white metal. There are currently four other Syrian refugee camps in Jordan in addition to the Zaatari camp: the Jordanian-Emirati camp of Mrajeeb al-Fhood, al-Azraq, al-Hadiqa and Cyber City in Irbid.

Hussein Khuzai, a sociology professor at al-Balqa’ Applied University, told Al-Monitor, “Colors evoke various feelings and notions in people. Green and blue radiate optimism, life and peace of mind, and they give the spectator hope and a renewed spirit. For instance, Britain paints bridges green to deter those attempting to commit suicide.”

Khuzai further explained, “Painting colors on refugee trailers gives refugees hope for the future and keeps them close to the regions they came from. It also imbues the love of nature in them and distances them from the arid, yellow desert. The artists opted for colors such as green and blue for vibrancy.”

Nehmat Nasser, a member of the Jordanian Plastic Artists Association, also believes in the significance of colors and how they affect people’s behavior. “The lack of color empties the soul and affects the mood of refugees,” she told Al-Monitor. “Desert and earth colors deepen their misery because of their dryness. There should be a blend of warm and cold colors to enliven the place.”