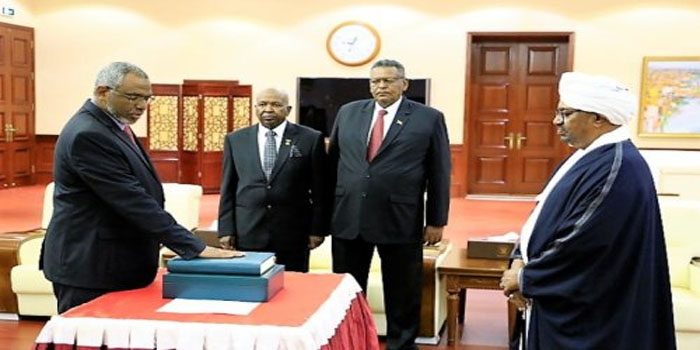 The Sudanese president Omer Hassan al-Bashir on Saturday evening swore in the new cabinet after a 24 hours delay amid confusion over some key appointments.

The official cabinet decrees issued by al-Bashir confirmed previous reports that the designated finance minister Abdallah Hamdok has turned down the position. It was not immediately clear if this was a last minute change of heart or if he never accepted in the first place.

Hamdok formally declined the appointment in a letter sent to al-Bashir but expressed his readiness to offer his expertise in tackling the economic crisis when needed.

Bashir decided to delegate the finance ministry to the newly appointed premier Moataz Moussa. It is not known if this is a temporary or permanent assignment.

The ministry of Social Security also witnessed a similar situation after Sumaya Abu Kashawa declined the role also for unknown reasons. She was replaced by businesswoman Widad Yacoub.

The ministry of Animal Wealth was also excluded from the appointments after reports that the Liberation and Justice Movement (LJM) refused to have its member Ahmed Fadul in this role.

A last-minute change was made to the state ministry of finance with Moslem Ahmed al-Amir Ahmed taking on the role after Nagi Sherif also turned it down.

The 20 new ministers and 27 state ministers were sworn in by al-Bashir in the presence of chief justice Haider Ahmed Dafallah and First Vice President Bakri Hassan.

During the ceremony, the president stressed that the Sudanese people have their hopes up after the formation of the new government which adds urgency to dealing with economic issues.

He expressed his confidence in the new cabinet and their ability to do their part and overcome the economic problems through the optimal exploitation of Sudan’s resources to achieve the aspirations of the Sudanese people.

Al-Bashir described the work in the government as a collective effort and emphasized the readiness of the presidency to cooperate and coordinate with the cabinet to provide the necessary support so that they can do their part in the required manner.