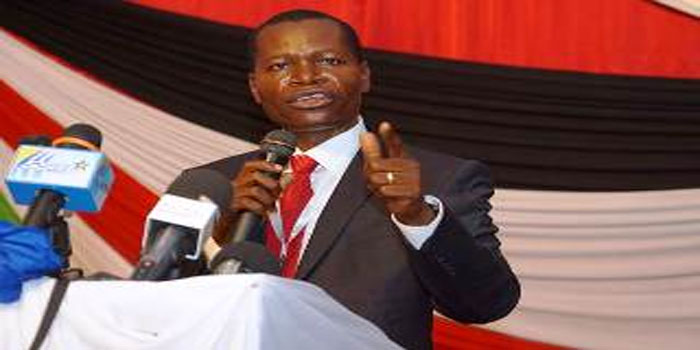 A faction of the opposition South Sudan National Movement for Change (SSNMC) announced its rejection of the revitalized peace agreement and removed its chairman Joseph Bangasi Bakosoro saying he endorsed the deal despite the rejection of the leading members.

The SSNMC is a member of the South Sudan Opposition Alliance which has been strongly divided over the revitalized peace agreement as some of them rejected the deal while others signed it. Bakosoro who was the former governor of Western Equatoria was among the signatories of the IGAD brokered agreement.

In a statement extended to Sudan Tribune signed by the SSNMC Secretary General Kwaje Lasu, the group regretted that Bakosoro was among the signatories of the revitalized peace agreement.

“We wish to let the South Sudanese people and the world know that the Chairman acted contrary to the decision of the SSNMC leadership,” reads the statement.

“The Chairman avoided any meaningful engagement with the SSNMC base and rejected verbal and written strong recommendations conveyed to him and SSOA by SSNMC leadership at the negotiations in Khartoum not to initial/sign any bad agreement and walk away from the talks,” it further stressed.

The statement said the signing of an oil deal with the Sudan which mediated the talks on the outstanding issues in the revitalization process ” created a serious conflict of interest” comprising its role as a mediator.

Further said that the agreement endorses and codifies “ill designs by the regime in South Sudan and the Jieng Council of Elders (JCE) to strategically benefit and empower one ethnic group” through the creation of 32 states.

“The SSNMC forces on the ground remain under the command of General Abraham Wani and are in full support of the changes in the leadership of SSNMC,” further stressed the statement.

The former governor was not reachable for comment on these developments. However, observers say his sack confirms the fragmentation process of the opposition groups as a result of the revitalized deal.

Also, the move is seen as another hit to the opposition alliance, which was formed last April to deliver a united and strong message of the various South Sudanese groups in a peace process dominated by the SPLM-In-Government of President Kiir and SPLM-In-Opposition led by Riek Machar.

“SSNMC along with other like-minded partners in SSOA remain seized of the pursuit of meaningful negotiated settlement to the crisis in South fulfilhat will fulfill the aspirations of the people,” said the statement.