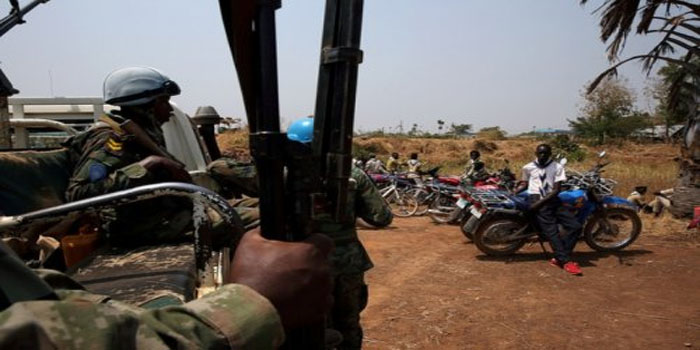 A peacekeeper of the United Nations Mission in South Sudan (UNMISS) was wounded by a shot when a government soldier attacked a convoy the blue helmets were protecting in the town of Yei.

The attack occurred on Saturday morning at 8.30 am when a convoy of four vehicles including two water tankers left their base in Yei to collect water.

According to the UNMISS, an SPLA soldier started shooting in the air near the UNMISS convoy before to shoot directly at one of the vehicles. He hit a Nepalese peacekeeper in the leg and the ran into a crowd.

The incident is the third violation of the ceasefire agreement since the signing of the final peace agreement on 12 September. The SPLM-IO said the government forces in the Yei River State attacked twice its position on 13 and 14 September.

The volatility of the security situation is attributed to the lack of control on the government forces.

UNMISS condemned the attack and urged the government to hold accountable the soldier who shot the convoy.

“This direct attack on UN peacekeepers here to help the people of South Sudan is unacceptable. The perpetrator must be found and held accountable by Government authorities,” said the Head of UNMISS, David Shearer.

“This situation is evidence of a lack of command and control of armed forces which has resulted in unruly elements who continue to commit human rights abuses in the area. It is beholden on the Government to bring their forces under control,” Shearer further said.

The UNMISS said before the shooting of the peacekeepers, the government soldiers fired about 50 shots at about 500 meters from the UN base in Yei at 5.20 am.

“All forces must disengage as required by the peace agreement and end the violence. The parties must also work together to build trust between themselves and with the people of South Sudan who are suffering immensely from the ongoing conflict,” the UNMISS chief said.

UN officials and IGAD representatives intend to react strongly to the act of violence in order to put the parties before their responsibilities. They say this is one of the lessons drawn from the violence in Juba of July 2016 which collapsed the first implementation of the peace agreement.