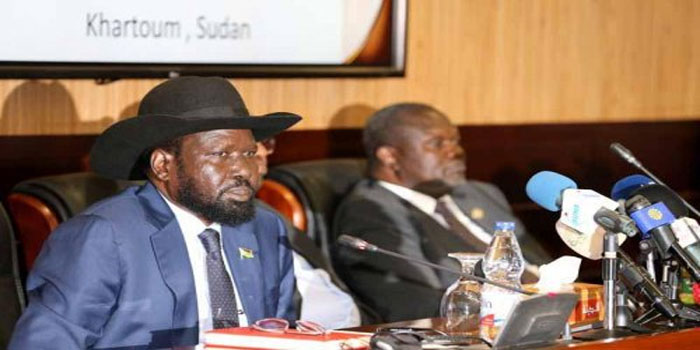 South Sudan rival parties have achieved some progress in Khartoum peace talks as they are expected to sign a framework agreement for a detailed deal to be signed at the end of the talks within two weeks.

President Salva Kiir and SPLM-Io leader Riek Machar pledged in a closed-door meeting Monday with Presidents Omer al-Bashir and Yoweri Museveni to make the needed concession for the sake of peace in the war-ravaged country.

Sources close to the process said discussions have resumed today on a draft framework agreement proposed by the Sudanese facilitators including three points, the first for a comprehensive ceasefire and the deployment of IGAD and African Union monitors.

The second point provides to have three capital cities in the country during the transitional period (Juba- Malakal-Wau) so that the government organs work from the three cities.

The third point provides that Sudan in coordination with South Sudan would take in charge security and repair of oil wells in South Sudan.

The Sudanese foreign minister al-Dirdeiry Ahmed said the parties have reached an agreement dubbed “Khartoum Political Declaration” that will be announced Wednesday.

Speaking at the Higher Academy for Strategic and Security Studies in the Khartoum suburb of Suba where the talks are taking place he added: “this political declaration paves the way for a final agreement to achieve security and stability in South Sudan”.

For his part, Machar said that Khartoum Political Declaration is based on the principles agreed in the meeting with Ugandan President Museveni, President Kiir and President al-Bashir.

Sudanese President Omer al-Bashir announced the opening of the border with South Sudan saying it would facilitate the movement of citizens and the flow of trade between the two countries.

He further stressed Sudan’s readiness to provide anything that contributes to the achievement of peace in South Sudan.

“If peace is achieved during the two weeks, you will find us in everywhere with you in support of the South Sudanese citizens,” he said.

President Kiir said he looks forward to reaching a peace deal to end the suffering of the South Sudanese people.

He further praised the efforts of President al-Bashir to end the four and half year conflict in South Sudan.

In parallel to the peace talks, Sudanese and South Sudanese petroleum ministers signed an agreement to resume oil production in South Sudan.

According to the deal, Khartoum will provide the oil workers and gears needed to repair and pump the oil from the fields.

The parties agreed to operate all the oil fields in Block 5A in the central part of Unity region.

In line with the signed deal, Khartoum will transfer to Juba all the information related to oil exploration in South Sudan.