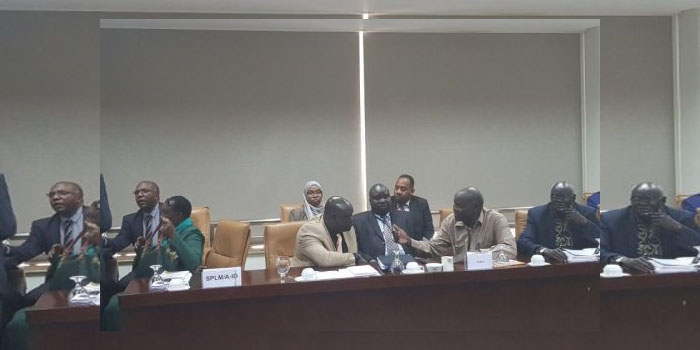 The South Sudanese parties Sunday resumed discussions on the final matrix for the implementation of the revitalized agreement for the resolution of the conflict in South Sudan.

On Saturday the mediation divided the parties into three committees and gave them the draft of the implementation matrix.

the first committee will deal with the chapters 1, 2 and 5 while the second panel will discuss the chapters 4, 6, 8 and the third committee was dedicated to the security arrangements and the implementation of the ceasefire agreement.

Speaking to reporters on Sunday, the government spokesperson Michael Makuei expressed optimism to conclude quickly the discussions on these documents.

“We are optimistic that we will be in a position to finish the work between today (Sunday) and tomorrow (Monday) so that we will initial these documents,” said Makuei.

He said the IGAD foreign ministers will meet after their return from the China-Africa summit which is expected to conclude its works on Tuesday.

The IGAD Council of Ministers will “adopt the agreement and the implementation matrix and thereafter the documents will be presented to the IGAD summit for approval” and the intervenes the final signing of the peace agreement.

The Extra-Ordinary Summit of IGAD Assembly of heads of State and Government will discuss the concerns of the opposition parties and seek to address it with President Salva Kiir directly.

The opposition SSOA and SPLM-IO said they would not take part in the final signing ceremony unless these issues are resolved.