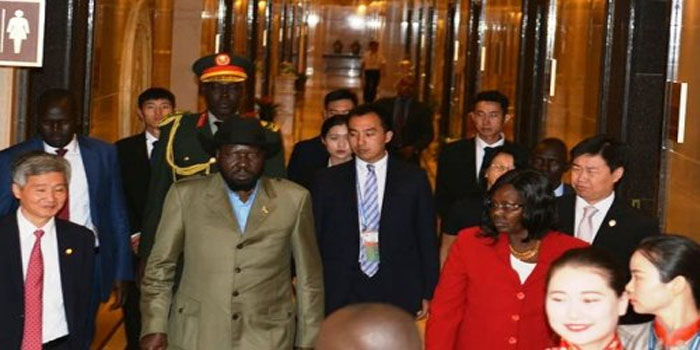 President Salva Kiir arrived in Beijing on Tuesday to take part in the Forum on China-Africa Cooperation which will take place in the Chinese capital on 3-4 September.

This year The FOCAC meeting will be held n under the theme, “China and Africa: Toward an even stronger community with a shared future through win-win cooperation.”

President Kiir who will also hold a series of meeting with Chinese government officials and oil companies among others is accompanied by Foreign Minister Nohial Deng Dhial and several ministers.

Also his wife Mary Ayen Mayardit was part of the presidential delegation.

On the top of the FOCAC this year is the Belt and Road Initiative which aims to improve trading and transport links between China and the world through infrastructure investments.

Launched by China in 2013, the initiative which includes only Ethiopia and Somalia for the east African countries aims to give better access to the Chinese goods to the world and to enhance its economic presence across the world.

The annual gathering will be attended by a big number of African leaders, chairperson of the AU Commission, the UN Secretary-General, 27 international and African regional organisations.