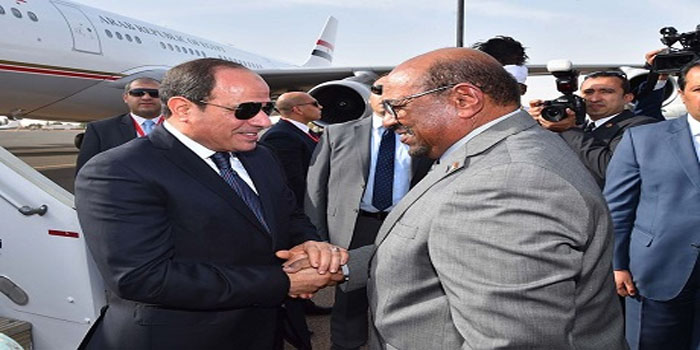 Egyptian President Abdel-Fattah El-Sisi said in a tweet on Thursday evening that he is extremely happy to be visiting Sudan, and described the relationship between the two countries as eternal.

“My happiness is enormous with my visit to the brotherly [country] Sudan; the ties between Egypt and Sudan are as eternal as the Nile, the vein of life and brotherhood between the two countries,” El-Sisi tweeted.

The two leaders will also discuss recent developments in the region and issues of mutual interest.

Al-Bashir last visited Egypt in March, when he backed El-Sisi’s bid for re-election bid days ahead of the presidential vote, and pledged greater cooperation after a year of tense relations between the neighbouring countries.

The two leaders agreed to strengthen ties and work together to boost trade and military and energy cooperation.

Sudan recalled its ambassador to Egypt in January without explanation, but allowed him to return two months later.

The leaders of Egypt, Sudan and Ethiopia have been in talks to resolve differences over a disputed mega-dam Addis Ababa is building on the River Nile, which runs through the three countries. Cairo fears the dam could threaten its water supply.

Sudan, which supports the Ethiopian project, has said that it is also keen on preserving Egypt’s interests in receiving its fair share of Nile water.

In May, Sudan’s Foreign Minister El-Dardiri Mohamed Ahmed said that his country, along with Egypt and Ethiopia, was determined to end the deadlock in talks over the Ethiopia’s dam project following the failure of previous negotiations.

“We are determined to overcome our differences on issues pertaining to the Renaissance Dam on a tripartite level between Egypt, Sudan and Ethiopia,” Ahmed had said in a press conference attended by Egypt’s Foreign Minister Sameh Shoukry.