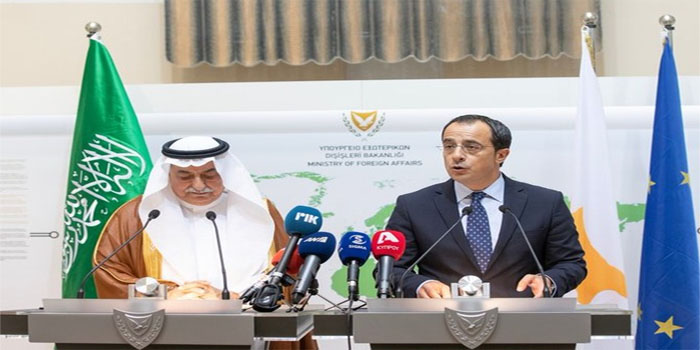 Saudi Arabia’s foreign minister says his country is keen to explore ways of strengthening relations with Cyprus given the European Union member country’s geographic location and long-standing ties with the Arab world.
Ibrahim Al-Assaf’s visit to the east Mediterranean island nation on Wednesday where he also met with Cypriot President Nicos Anastasiades was the first by a top Saudi official.
Al-Assaf said there’s “high interest” in developing relations “on all fronts.”
Among the topics they discussed were some of the most pressing challenges in the region, including the Palestinian-Israeli conflict, Syria, Iran and Yemen.
Cypriot Foreign Minister Nikos Christodoulides said the two men agreed to focus initially on tourism and investment.
“In this context, we stand ready to proceed with the facilitation of bilateral Business Forums in our two countries, respectively, within the framework of our Economic Diplomacy program,” he said.
Christodoulides noted a shared understanding to jointly address challenges like terrorism, the rise of extremism and climate change.
The Cypriot foreign minister said EU-Saudi cooperation is key to dealing with regional challenges and that Cyprus would continue advocating that in Brussels.
Both sides also discussed opportunities for cooperation regarding the Kingdom’s Vision 2030, which aims to diversify the economy and develop political, economic, energy, security, military and defense fields.
Some important steps have already been taken between the two countries, such as implementing the Double Taxation agreement and the Air Services agreement that have enhanced bilateral relations.
Christodoulides also briefed Al-Assaf on the latest developments on the Cyprus problem and expressed their sincere appreciation for Saudi Arabia’s support of their “efforts to reach a just, viable and comprehensive solution” to the issue. “Taking into consideration recent developments in our Exclusive Economic Zone and particularly the illegal activities and aggressive behavior of Turkey, the solidarity and support of countries such as Saudi Arabia is indispensable,” Christodoulides said.
Speaking during a joint press conference Al-Assaf said the Kingdom “supports the legitimacy and sovereignty of Cyprus and the decisions by the United Nations and hopes that the two sides will solve the problem peacefully.”
He added: “We need to take advantages of the many elements that bring us together and the economic opportunities that our two countries offer.”
Meanwhile, Cyprus’ defense minister said the east Mediterranean island nation and neighbor Egypt are exchanging information to bolster security around an offshore search for natural gas as part of enhanced defense ties.
Savvas Angelides says the two neighbors’ information-sharing extends to countering any extremist threats.
The Cypriot minister says defense ties are also being upgraded between Cyprus, Egypt and Greece as through joint military exercises and personnel exchanges.
Angelides was speaking Wednesday after escorting his counterpart, Lt. Gen. Mohamed Ahmed Zaki, to a meeting with Cypriot President Nicos Anastasiades.
Cyprus and Egypt share a sea border delineating their respective exclusive economic zones where each country is carrying out exploratory gas drilling.
Officials said a recent discovery of Egypt’s Zohr gas field bodes well for more discoveries in Cypriot waters.