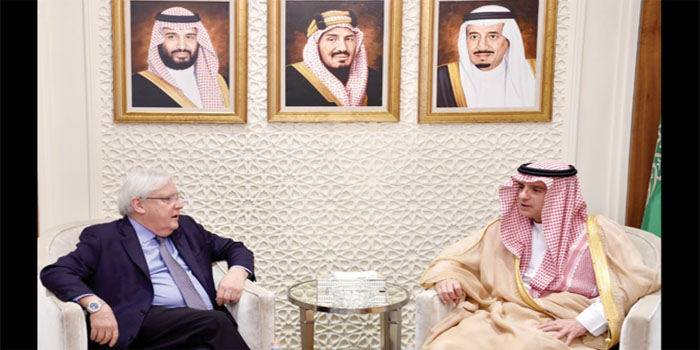 During the meeting, they discussed the political and humanitarian situation in Yemen and Saudi Arabia’s support for the UN’s efforts to alleviate the sufferings of the Yemeni people.

Saudi Arabia is at the forefront of international efforts to provide relief to the Yemenis. On March 28, Saudi Arabia and the UAE donated $930 million to the UN for humanitarian aid in Yemen.

War-ravaged Yemen is the world’s worst humanitarian crisis, according to the UN, with 75 percent of the population — 22 million people — in need of aid. A severe cholera outbreak has also killed more than 2,000 people and infected 1 million.

On Wednesday, the King Salman Humanitarian Aid and Relief Center (KSRelief) distributed 9,000 packs of meat to 27,000 needy families in 11 camps set up for displaced people in Yemen’s Marib province. In addition, a specialized medical team of 25 doctors arrived in Marib to provide health services to all Yemenis.

There are some 2 million Yemenis working in the Kingdom who send more than $10 million remittances to their families in Yemen.

To boost the economy of Yemen, Saudi Arabia has also funded its central bank with $2 billion. According to a recent statement by Saudi Ambassador to Yemen Mohammed Al-Jabir, the Kingdom’s assistance to Yemen totaled about $10.96 billion.

The Kingdom’s total aid to developing countries since 1973 had reached $152 billion, he said.

Earlier, the UN envoy also expressed his aspiration to work with the Yemeni government and engage with all stakeholders without exception to achieve lasting peace in Yemen.