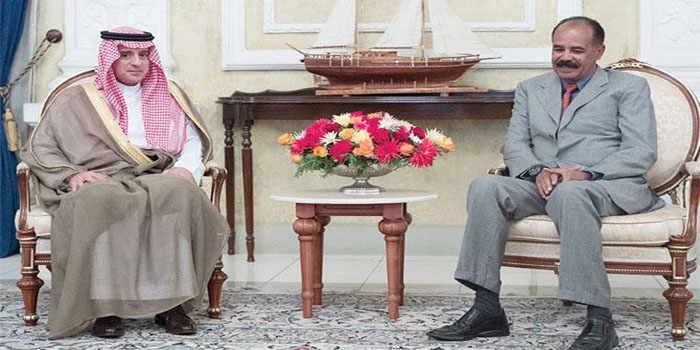 Saudi and Eritrean delegations have held a series of meetings to deepen relations between the two countries. Saudi Foreign Minister Adel Al-Jubeir visited the Eritrean capital Asmara for talks with President Isaias Afwerki. On Sunday, Al-Jubeir met Eritrean Foreign Minister Osman Saleh Mohammed in Jeddah.
The two foreign ministers discussed issues of mutual interest, and regional and global developments.
Saudi Arabia and Eritrea enjoy historical ties. Following the formation of the Anti-Terror Quartet (ATQ) — comprising Saudi Arabia, Egypt, the UAE and Bahrain — Eritrea sided with the group in support of its principled stand.
It also stood firmly with the ATQ after it cut ties with Qatar in protest against its support for terrorist groups and Iran, which is flouting international laws by interfering in the internal affairs of the countries in the Middle East. Afwerki visited Saudi Arabia several weeks ago at the invitation of King Salman.