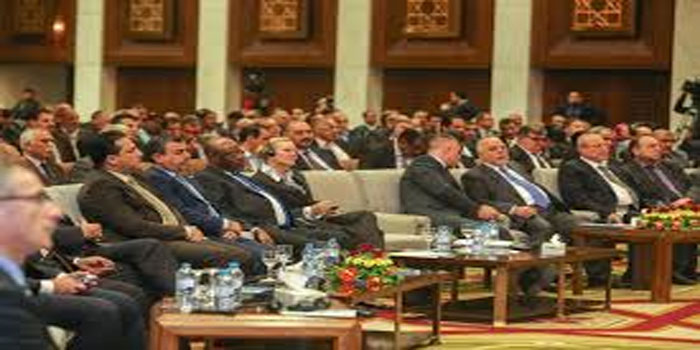 The Governorate of Karbala in cooperation with the United Nations Development Programme (UNDP) and support of the Food and Agriculture Organization (FAO) organized a conference to roll out the Holly Karbala Private Sector Development Strategy (2018-2030) in Karbala province.

The Holly Karbala Private Sector Development Strategy (2018-2030) (HKPSDS) will support the diversification of the economy as one of the most important keys for the economic growth in Karbala. This new strategy will help create jobs and promote growth in the local economy.

UNDP, and the Governorate of Karbala, Provincial Council, Holy Shrines, private sector and academia, have been developing the HKPSDS for the province. Representatives of private sector companies, associations, academics, Directors of public departments, media and other UN agencies as well as officials from the local authority attended the conference.

The Governor of Karbala, Mr. Aqeel Al-Turaihi, said in his speech during the conference:

“The Private Sector Development Strategy will be a center of excellence of the private sector development among the local governorates, and Holy Karbala Government will provide full support to the implementation of this strategy”.

“The implementation of this strategy will contribute significantly to advance the Sustainable Development Goals (SDG). In particular SDG 8 (Decent work and economic growth), leading to achieve higher levels of economic productivity through diversification, technological upgrading and innovation.

“It will also help to achieve SDG 17 (Partnerships for Goal) to encourage and promote effective public, public-private and civil society partnerships, building on the experience and resourcing strategies of partnerships”.

The HKPSDS is an adaptation to the local context of the PSDS Iraq 2014 – 2030. It is designed to address the challenges identified and to achieve the objectives set on the national level in the PSDS Iraq (2014-2030) within Karbala Province and is intended to utilize the resources and opportunities available in the province, to achieve the overarching development objectives of revitalizing and strengthening the local private sector and improve the business environment, to contribute to local economic growth, sustainable development and job creation.

As the first one of its kind to be implemented in the local governorates of Iraq, The PSDS envisages achieving, by 2030, the vision of “Developing a viable, competitive, local private sector, led by the business community that contributes to the local economy, job creation and sustainable local development in partnership between the Local Government of Karbala Governorate and the local private sector.