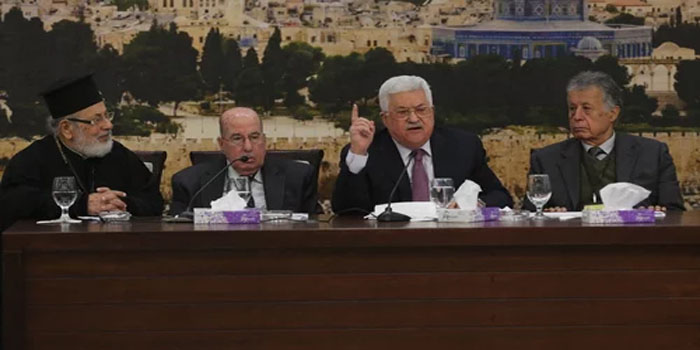 Palestinian leaders called on President Mahmoud Abbas to withdraw recognition of Israel and break off security cooperation, in a move that follows the Trump administration naming Jerusalem as the Israeli capital.

The Palestine Liberation Organization’s Central Council declared it should no longer be bound by the 1993 Oslo peace accords and that its leaders will never recognize Israel as a Jewish state, according to a statement released at the end of a two-day conference in the West Bank city of Ramallah. It said Palestinians will again seek full statehood recognition from the United Nations.

“The immediate goal is the independence of the state of Palestine, which requires moving from the status of an authority with self-rule to the status of sovereignty,” the statement said. Palestinians will restore their recognition of Israel when Israel accepts Palestine as a state, it said.
Abbas has cut off diplomatic contact with the U.S. since President Donald Trump said last month that Jerusalem is Israel’s capital and intends to move the American embassy there from Tel Aviv. Palestinians see east Jerusalem as the capital of their own future state and have long appealed to the U.S. and other nations to resist Israel’s claim to the entire city.

Abbas, who will make the ultimate decision whether to implement the council’s recommendations, opened the conference Sunday by declaring that Palestinians will “slap back” at Trump and seek to replace the U.S. with other international players in future peace negotiations with Israel.

‘Colonial Project’
Israeli Prime Minister Benjamin Netanyahu is on a visit to India and didn’t immediately respond to the PLO council’s action. Earlier he condemned Abbas’s speech, particularly the Palestinian leader’s assertion that Israel is a “colonial project” that has no real connection to Judaism.
Abbas “revealed the truth and tore off the mask,” Netanyahu said in a statement. He has shown that “the source of the conflict between us and the Palestinians is their refusal to recognize the Jewish state with any borders,” the prime minister said.

Trump said in a Twitter message last week that the U.S. gives the Palestinians hundreds of millions of dollars each year and gets “no respect or appreciation.” His ambassador to the United Nations, Nikki Haley, has said the administration is considering a cut in aid to the UN agency that takes care of Palestinian refugees.

The administration is reviewing a proposal to send less than half of a planned $125 million payment and demand that other countries pay more, according to two people familiar with the deliberations.
Secretary of State Rex Tillerson, Defense Secretary James Mattis and National Security Adviser H.R. McMaster support that plan, while Haley and top White House aide Jared Kushner advocate sending nothing. Kushner oversees Trump’s peace efforts in the region.

While Trump’s threat to cut the U.N. funding is popular in Israel, government security officials have warned that reducing the assistance that goes for food, education and health care could fuel violence and strengthen radical Palestinian forces in the West Bank.