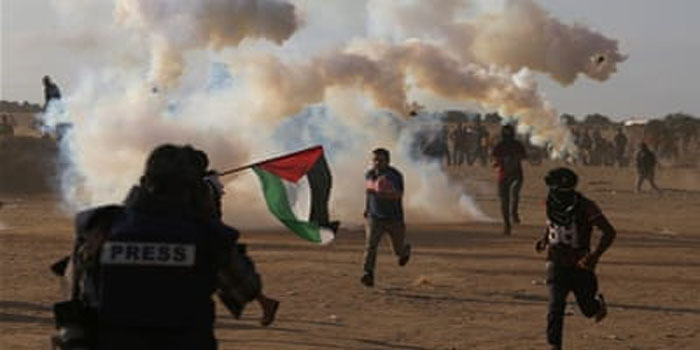 For the first time, the Palestinian government has submitted a referral to the International Criminal Court (ICC) calling on prosecutors to open an immediate investigation into what it called Israeli crimes in the occupied Palestinian territories.

Palestinian Authority Foreign Minister Riyad al-Malki arrived on Tuesday at the independent court, based in The Hague, Netherlands, to meet with Prosecutor Fatou Bensouda.

“The State of Palestine took an important and historic step towards justice for the Palestinian people who continue to suffer from ongoing, widespread and systematic crimes,” said Malki in a press conference after the meeting.

OPINION
How the Gaza massacre exposed international cowardice
Andrew Mitrovica
by Andrew Mitrovica
Malki said the referral addressed a myriad of issues, including “settlement expansion, land grabs, illegal exploitation of natural resources, as well as the brutal and calculated targeting of unarmed protesters, particularly in the Gaza Strip”.

The diplomatic move comes after widespread outrage in the occupied Palestinian territories and internationally over the Israeli army’s killing on May 14 of 62 unarmed Palestinian protesters in the Gaza Strip, in what was described by rights groups as a massacre.

“Through this referral, we want the Office of the Prosecutor to open, without delay, an investigation into all crimes that she presently concludes have been commissioned or are ongoing,” said Malki.

“This referral is Palestine’s test to the international mechanism of accountability and respect for international law,” he added.

State referral
While Israel is not a party to the Rome Statute – the treaty of the ICC to which all members are bound to – its nationals could be tried by The Hague-based court for crimes committed on Palestinian territory.

The State of Palestine formally became a member of the ICC in April 2015, giving the court jurisdiction over crimes committed in the territory since June 13, 2014 – including the 2014 Israeli assault on Gaza.

The ICC’s Office of the Prosecutor began its preliminary examination of the “situation in Palestine” in January 2015.

In this phase, the prosecutor is meant to determine whether the criteria have been met to warrant pursuing a formal investigation based on the information available publicly or submitted to the office and whether local courts are carrying out credible investigations.
While the PA and Palestinian NGOs have submitted documents as proof of Israeli government crimes, and requests to open a formal investigation, Palestine has never formally referred a case.

In regards to the referral, Alex Whiting, a former ICC official, said that a state referral makes it “much harder” for the Office of the Prosecutor “to stay in the preliminary examination phase for years.”