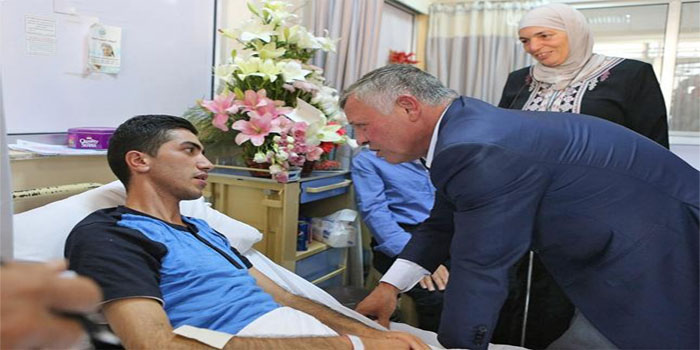 His Majesty King Abdullah on Sunday stressed that all who dare to target Jordan’s security and the safety of its citizens will be held to account, underlining that Jordan will fight the khawarij (outlaws of Islam) with resolve and will strike firmly.

King Abdullah made the remarks while chairing a National Policies Council (NPC) meeting, attended by HRH Crown Prince Hussein, at Al Husseiniya Palace, which focused on the developments related to the terror attack against a joint patrol from the Public Security Department and the Gendarmerie Department in Fuheis city on Friday and a raid on the hideout of the terrorist cell behind it in Salt city, in which a number of security personnel fell martyrs, according to a Royal Court statement.

His Majesty offers condolences to the nation for the fallen soldiers and wished the injured a speedy recovery.

At the meeting, also attended by HRH Prince Feisal, adviser to His Majesty and NPC chairman, and HRH Prince Rashid, the King affirmed that Jordan would remain strong and impenetrable in the face of terror and terrorism, with the unity of Jordanians and the vigilance of the Nashama (brave men) of the Jordan Armed Forces-Arab Army (JAF) and security agencies.

His Majesty emphasised that this cowardly terrorist act, and any attack targeting Jordan’s security, will only make Jordanians stronger, more united, and determined to eliminate terrorism and terrorist gangs.

In the face of such incidents, Jordanians grow stronger and more determined to cleanse Jordan and the region from the khawarij, and to protect Islam, the King said.

His Majesty added that this cowardly, criminal act is a reminder that Jordan is targeted by forces of darkness that seek to harm it and its citizens, but the Kingdom’s goal has always been to eradicate terrorism, and Jordan will not waver from this objective despite the sacrifices.

All must stand firm against dark ideologies, the King stressed, noting that there is no room for hesitance in combating terrorism, for it affects the nation’s present and future.

The country’s strong national front and the awareness of its people, who reject evil ideologies alien to Islam, are the source of its strength and distinguish Jordan, His Majesty affirmed, voicing pride in the bravery of Jordanians and their dedication to safeguarding their country’s security.

The King “saluted the Jordanian martyrs who gave their lives for the homeland, adding that they join the ranks of martyrs who have heroically sacrificed their lives in the line of duty and made all Jordanians proud”, the statement said.

Also on Sunday, His Majesty the King, accompanied by Crown Prince Hussein, checked on JAF and security personnel injured in the Fuheis terrorist attack and the raid on the terrorist cell in Salt, who were receiving treatment at the King Hussein Medical Centre.

King Abdullah was briefed by Royal Medical Services Director Maj. Gen. Muin Habashneh and the medical team on the condition of the injured personnel and the treatment they were receiving.

His Majesty praised the major role and sacrifices of the army and security personnel in defence of the homeland, its security and stability, wishing them a speedy recovery and issuing directives that they receive the best medical services.

Royal Hashemite Court Chief Yousef Issawi, and Adviser to His Majesty and Director of the Office of His Majesty Manar Dabbas accompanied the King on the visit.