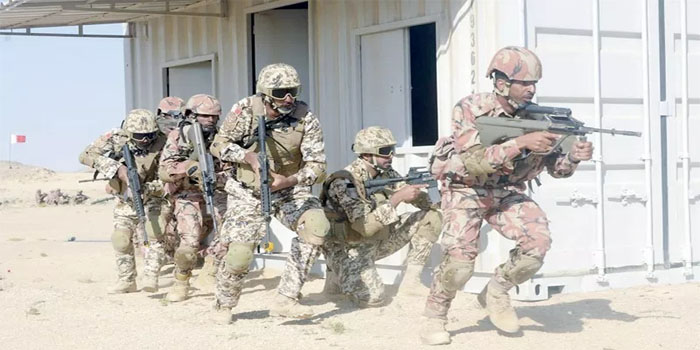 The Royal Army of Oman (RAO), represented by the South of Oman Regiment of the 11th Infantry Brigade and the 22nd Royal Shock troop Regiment of the Bahrain Defence Force (BDF) carried out the joint exercise of Omani-Bahrain (Arabian Tiger 4) with the support from the Royal Air Force of Oman (RAFO) the Sultan of Oman’s Parachutes and the SAF Engineering.
The joint exercise was held in Rabkut Ranges of the Royal Army of Oman (RAO), in which the participating forces carried out the targeted plans, in order to achieve the training objectives of the exercise activities, during which the participants showed a high level of performance and morale. The events of the exercise reflected the potentials of RAO’s employees and their competency and ability that reflect the high level of training and qualification, and the ability to harmonise in the implementation of common tasks.
The implementation of such exercises comes within the framework of RAO training plan to maintain the high level of performance and training and combat efficiency of RAO employees, as part of the annual training programmes implemented with sisterly and friendly countries