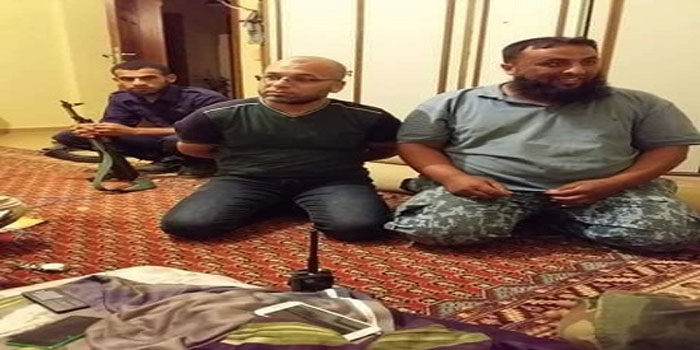 Egyptian official newspapers reported Tarek Ibn Zeyad’s Battalion, affiliated with the LNA as saying they captured Zidan, an Egyptian fighter with Al-Qaeda in Libya and one of the most prominent aides and personal guards of El-Ashmawy, in a special operation in the East Libyan city of Derna.

The battalion’s Facebook page posted a picture said to be of  Zidan, after his capture.

Zidan is believed to have fled Egypt following the ouster of former Islamist president Mohamed Morsi in July 2013 and is one of the most wanted terrorists for Cairo, according to Egyptian media.

Earlier Monday, Ahmed Mismari, spokesman of the LNA, which controls eastern Libya, said that El-Ashmawy was apprehended in Derna, where eastern Libyan forces are fighting terrorist groups. A picture of El-Ashmawi with blood on his face has been published by the LNA.

An Egyptian military source told Ahram Online that it is not clear when El-Ashmawy, who has been sentenced to death in Egypt, will be handed over to Egyptian authorities,

El-Ashmawy was born in 1978 and graduated in 2000 from the Military Academy. He was expelled from the Egyptian army in 2011.

El-Ashmawy, a former Special Forces officer also known as Abu Omar El-Mohager (the immigrant), was considered among the most dangerous terrorists linked to many attacks in Egypt.

In July 2015, El-Ashmawy announced the establishment of the Mourabitoun organisation in Libya, which is loyal to the Al-Qaeda terrorist organisation.

El-Ashmawy is believed to have been involved in an assassination attempt on former Egyptian Interior Minister Mohamed Ibrahim and the murder of top prosecutor Hisham Barakat, as well as plotting an attack on Egyptian border guards in February 2015, which resulted in the death of 29 armed forces personnel.

He is also believed to be behind a deadly attack on Christian pilgrims in Upper Egypt’s Minya governorate in May 2017, which killed 29 people.

In January 2015, his group was suspected of staging a multi-pronged attack on the headquarters of the Army Battalion 101 headquarters in El-Arish in North Sinai, which killed 30 soldiers and officers.

An Egyptian military court sentenced him, in absentia, along with 13 other terrorists to death over the New Valley massacre in Farafra on 19 July 2014, where 22 border guards were killed.