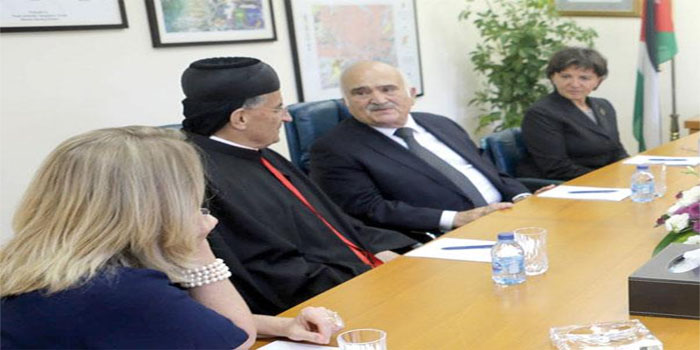 HRH Prince Hassan, chairperson of the Board of Trustees of the Royal Institute for Interfaith Studies (RIIFS), on Monday received Lebanon’s Patriarch Moran Mor Bechara Boutros Al Rahi and his accompanying delegation, according to His Highness Office’s statement.

His Highness underlined the efforts of the Maronite Church in spreading the Arabic language and literature through the establishment of the first printing press in the Middle East in the 16th century, stressing the need to restore the period of enlightenment and to renew Arabic discourse in a way that leads to a similar awakening movement that began in the 19th century at the hands of renowned Arab figures, including Lebanese intellectuals.

Cardinal Rahi, the top Maronite authority in his country, expressed pride in the Lebanese-Jordanian relations as well as the relationship between the Maronite Church and Jordan.

He also praised the efforts exerted by HRH Prince Hassan including those related to enhancing interfaith dialogue, the statement added.

During the meeting, Cardinal Rahi and Prince Hassan discussed challenges facing the region, especially the issue of refugees and Israeli practices, and the newly enacted “national state law” by the Israeli Knesset.

The two sides also stressed the importance of respecting diversity and differences in the Levant, describing the region as the cradle of civilisations. They also underlined the need to focus on our commonalities among human communities and the values shared with other cultures and religions.

The meeting was attended by the Minister of Tourism and Antiquities Lina Annab.

The patriarch was in Amman on a visit that will last through Thursday at an invitation by Prime Minister Omar Razzaz. During his stay in Jordan, he is scheduled to visit a number of Christian sites and hold meetings with Razzaz, a number of politicians and clergymen, as well as the Council of the Churches in Jordan, a Jordan Tourism Board (JTB) statement said.