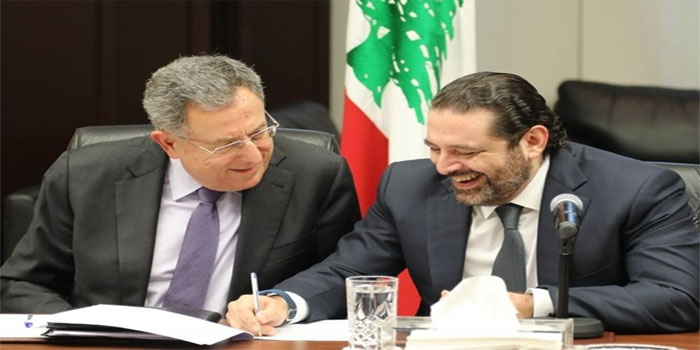 Lebanon is set to reject a previous American proposal to resolve a maritime border dispute with Israel during U.S. Secretary of State Rex Tillerson’s visit to Beirut this week because it infringes on the country’s oil and land rights, ministerial sources said Tuesday. The proposal, which was presented to top Lebanese leaders by acting U.S. Assistant Secretary for Near Eastern Affairs David Satterfield last week, will again be floated by Tillerson in his separate meetings with President Michel Aoun, Speaker Nabih Berri and Prime Minister Saad Hariri, a ministerial source told The Daily Star.

Tillerson, currently in Kuwait as part of a regional tour, is scheduled to arrive in Beirut Thursday for talks with Lebanese leaders on heightened tensions in the southern border region fueled by Israel’s construction of a wall and its threats over Lebanon’s oil and gas exploration near a disputed maritime boundary.

Initially, due to Tillerson’s visit, the weekly Cabinet session held every Thursday was put off.

But now the Cabinet is set to meet at Baabda Palace Thursday afternoon to respond to the U.S. proposal to resolve the maritime border dispute between Lebanon and Israel that will be relayed on the same day by Tillerson, the source said.

Known as the “Hoff Line,” the U.S. proposal calls for Lebanon to acquire 550 square kilometers of the disputed 860 square kilometers that Lebanon insists is part of its maritime border, and abandon the remaining part to Israel, or else the United States will end its mediation effort in the oil dispute between the two countries, the source said. The source added that the Cabinet was expected to reject the U.S. proposal because it encroaches on Lebanon’s oil and land rights.

Satterfield, who held talks with Aoun, Berri and Hariri last week, was believed to be mediating in the maritime dispute over Block 9 in south Lebanon after Israeli Defense Minister Avigdor Lieberman said that oil and gas exploration projects in the block were “very provocative.”

In 2011, U.S. diplomat Frederick Hoff visited Lebanon to help efforts to demarcate the maritime border between Lebanon and Israel.

His proposal reportedly offered 60 percent of the disputed territories to Lebanon, while giving the remaining 40 percent to Israel. The Lebanese government at the time rejected Hoff’s proposal.

The upcoming parliamentary elections, set for May 6, the Syria refugee crisis as well as Iran’s role in the region and the recent U.S. sanctions on Hezbollah will figure high in Tillerson’s talks with Lebanese officials.

Lebanese leaders are expected to raise with the top U.S. diplomat Israel’s construction of the “separation wall” on a disputed area along the Lebanon-Israel border, as well as Israel’s threats over Lebanon’s oil and gas exploration, an official source told The Daily Star.

Tillerson’s meeting with Hariri at the Grand Serail will be followed by a joint news conference at 1 p.m. Thursday.

In what appeared to be a toughening of Lebanon’s position on the maritime dispute with Israel ahead of Tillerson’s visit, Aoun, Berri and Hariri agreed Monday on refusing to give up “any inch” of Lebanese territory.

They also agreed on a unified position against Israeli attempts to encroach on land and maritime borders.

Hariri Tuesday discussed preparations for Tillerson’s visit during a meeting with U.S. Ambassador to Lebanon Elizabeth Richard. Hariri and Richard also discussed the situation in Lebanon and the region.

During its meeting to be chaired by Aoun, the Cabinet is set to address 66 items on the agenda, including financial matters, a $120 million loan offered by the World Bank to finance the implementation of a project involving sanitary services and an agreement with the European Bank to finance the Al-Ghadir basin project in Beirut’s southern suburbs.

The agenda also includes a request from the State Security for allocations worth LL685 billion to cover the expenses of recently appointed employees, and a request from the Foreign Ministry to appoint nonresident ambassadors abroad.

The Cabinet is also set to address the rehabilitation of informal trash dumps throughout Lebanon.

Meanwhile, both Hariri and MP Walid Jumblatt reasserted that they would uphold their “historic relationship” despite some policy differences in the past that marred ties between the Future Movement and the Progressive Socialist Party.

“This relationship with Sheikh Saad, with the Hariri family, with the Future Movement, even if it had experienced some hitches, remains a constant relationship based on solid ground, the ground of freedom, diversity and stability,” Jumblatt told reporters before he went into a meeting with Hariri at the prime minister’s Downtown Beirut residence Tuesday night.

Jumblatt, who was accompanied by his son Taymour and former minister Wael Abu Faour, added: “It is true that sometimes we disagree and have different points of view, but ultimately the slogan that must remain is: stability and the fight against terrorism.”

Earlier in the day, Hariri said the Future Movement would maintain the political track with Jumblatt.