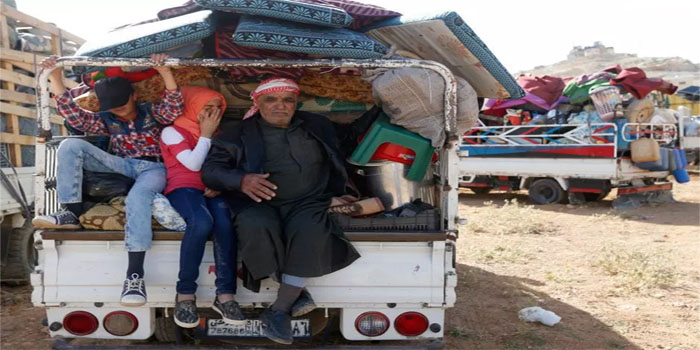 The return of Syrian refugees should not be linked to the resolution of the conflict in their country, Lebanese President Michel Aoun said yesterday.

Aoun reiterated that his country believes that Syrian refugees in Lebanon should return to safe areas in their home country, and he called on Switzerland to support Lebanon in taking steps to help refugees return.

Speaking at a joint press conference with his Swiss counterpart Alain Berset in the presidential palace in Beirut, Aoun described the issue of Syrian refugees as a “humanitarian” problem that needs to be resolved.

“The international community is helping refugees, so why is it not helping them rebuild their houses in their country?” he asked.

Six batches of Syrian refugees have returned to Syria from Lebanon as part of the “voluntary return” system, in coordination with the Lebanese authorities and the Syrian regime. No official numbers of those who returned are available.
According to Lebanese official figures, around one million and a half million Syrian refugees are currently living in Lebanon. But the United Nations puts their number at less than a million refugees.

On his part, Berset said that his country will continue to support Lebanon through assisting local residents and refugees in the country until circumstances allow for a safe, voluntary return of refugees to their home countries.

“We recognise the challenges that Lebanon is facing due to the Syrian conflict, and my country salutes Lebanese generosity in hosting refugees, and we support Lebanon in this difficult stage.”

Berset is in Lebanon on a three-day official visit.