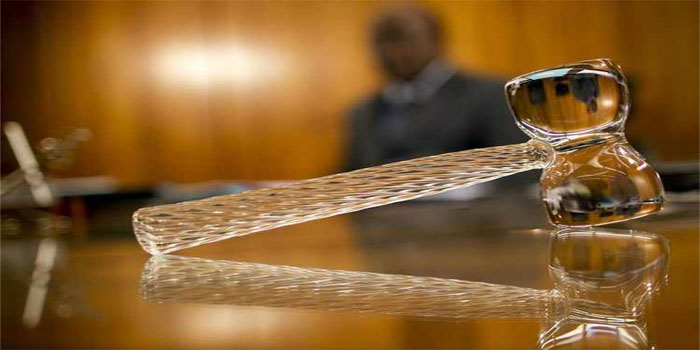 A new war of words flared up Tuesday between rival ministers over the constitutionality of a decree promoting a number of Army officers, reflecting a deepening political rift between the president and the speaker of Parliament, and marking a grave escalation in a monthlong standoff that threatens to plunge the country into uncertainty and paralyze the work of state institutions.

The mounting dispute between President Michel Aoun and Speaker Nabih Berri over the officers’ decree was manifested in tension during last week’s Cabinet session, when one of the speaker’s three ministers, Agriculture Minister Ghazi Zeaiter, walked out of the session, as well as in differences among rival parties over proposed reforms contained in a new vote law to govern the May 6 parliamentary elections, Lebanon’s first since 2009.

At the root of the fresh tension between Aoun and Berri was a decision by a Justice Ministry body that ruled that the controversial decree did not require the finance minister’s signature as demanded by the speaker, and thus the ruling was seen to be in the president’s favor.

The decision by the ministry’s Legislation and Consultancy Commission came at the request of Justice Minister Salim Jreissati, who asked the body to deliberate in the row over the decree that was signed last month by Aoun, Prime Minister Saad Hariri and Defense Minister Yaacoub Sarraf, sidestepping the finance minister’s approval. Jreissati, who belongs to the Free Patriotic Movement founded by Aoun, is one of eight ministers loyal to the president.“In addition to the president and the prime minister, the relevant minister who has the right to sign the mentioned decree is the defense minister or any other minister whose administration the officers fall under,” the commission said in its ruling published in local newspapers Tuesday.

The commission’s decision was based on a similar one taken by the Shura Council in 1991 concerning financial laws that invalidated a decision taken by the finance minister in 1988. The commission stated that there were no provisions in the Constitution, laws or financial or administrative systems that allow the finance minister to monitor the work of his fellow ministers.
In a quick response to the commission’s decision, Berri, who is currently in Iran, said: “Unfortunately, it was a consultation made according to demand.”

Berri has previously rebuffed Aoun’s repeated calls for the speaker to take the decree dispute to the judiciary, casting doubts about its independence as long as the Justice Ministry was controlled by a minister who belongs to the FPM.

The decree seeks to promote around 200 Army officers – all Christians aside from 15 Muslims – who served under Aoun in the late 1980s when he was Army commander, advancing their seniority and rank by one year.

Berri was reported to have been enraged because the decree lacked the finance minister’s signature. He said that the dispute would be resolved if Finance Minister Ali Hasan Khalil, a top political aide to Berri, adds his signature to the decree.

Khalil rejected the commission’s ruling, describing it as “a pretext to cover up the violation of the Constitution.”

The commission’s ruling will “further confuse its architects and create new problems,” Khalil said in a tweetstorm Tuesday.

“We don’t need an opinion according to demand,” he said. He called on Jreissati to read a decision made by the Shura Council in 1992 that stated that the finance minister must sign all decrees that directly or indirectly incur financial burdens on the state Treasury.

However, Jreissati strongly defended the commission’s ruling on the decree dispute, saying the legal debate over the decree had finished.

“We consider today that the constitutional and legal debate [over the decree dispute] is finished [because] the [legal] opinion has been reached, backed by an indisputable decision issued by the highest administrative judicial body,” Jreissati said. “We resorted [to the judiciary] and the ruling was issued. They must comply as we do when rulings are issued.”

Jreissati’s remarks drew a quick rebuke from Khalil. “The latest innovation is to hear from a concerned minister that the body he had consulted was the highest judicial authority. We are talking in line with law,” Khalil said sarcastically in a series of tweets Tuesday night. “No one is above the Constitution. We bear responsibility for any word we say and we know very well its meaning. No one should threaten us.”

The exchange of harsh rhetoric between Jreissati and Khalil cast gloom over a proposal by Berri to resolve the decree dispute. The proposal calls for the decree to promote Army officers who served under Aoun to be combined with other decrees in order to secure promotion for all eligible officers in the military corps in one joint decree.

This amalgamated decree would be signed by the defense, interior and finance ministers before being presented to the prime minister and the president to be signed, a source close Berri told The Daily Star.

The Aoun-Berri dispute was among topics discussed during the weekly meeting of the Future Movement’s parliamentary bloc chaired by Hariri.

“The bloc highly praised Prime Minister Saad Hariri’s efforts to contain the repercussions resulting from the decree crisis … and avoid its negative impact on the government’s performance and the interests of citizens,” a statement issued after the meeting said.

Meanwhile, the Cabinet is set to meet under Hariri at 11:30 a.m. Thursday at the Grand Serail to discuss 71 agenda items, most of them dealing with financial allocations to fund various projects.

The ministers are also expected to tackle agricultural projects as well as review a proposal by the state-run Council for Development and Reconstruction to cope with the long-running garbage crisis, an official source at Baabda Palace told The Daily Star.

Bassil has also presented an urgent proposal to the Cabinet to extend the deadline for Lebanese expatriates to register to vote in the May elections until Feb. 15, LBCI channel reported.