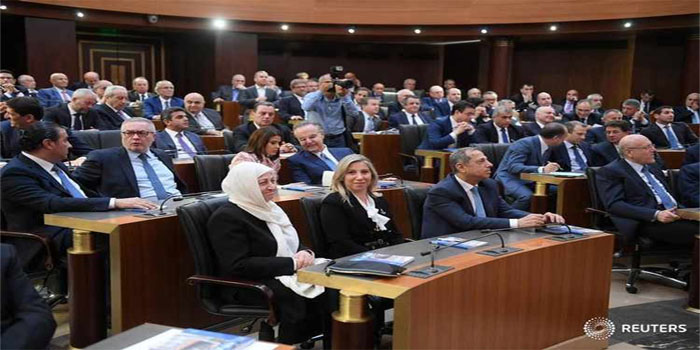 Lebanon faces a political impasse three months after an election produced a parliament tilted in favour of the Iran-backed Shi’ite group Hezbollah, with no sign of compromises needed to form a unity government.

Negotiations have run into a knot of complications, notably how Prime Minister-designate Saad al-Hariri can form a government that reflects the result while satisfying Western and Gulf Arab concerns over Hezbollah influence.

One senior politician said talks were in a state of “stagnation”. A senior official from another party said there was no indication of compromises and forecast a period of “meaningless movement”.
The heavily armed Hezbollah, with allied parties and independents, won more than 70 of parliament’s 128 seats in the May 6 election, a reversal of Lebanon’s 2009 vote when groups with Western and Saudi support scored a majority.

Hezbollah, designated a terrorist group by the United States, called it a victory for the “choice of the resistance” – a reference to the arsenal it has used in conflicts with Israel and more recently in neighbouring Syria’s war.

The result has spawned new complications for Lebanon’s tangled sectarian politics – long an arena for regional and international struggles played out through local allies.

Christians, Druze and Sunni Muslims are all jostling for ministries. Additionally, the Shi’ite Muslim Hezbollah aims to move beyond its traditional backseat role in the next cabinet.

It wants three instead of two seats in this cabinet, and more influential ministries than it has previously held, to include public service providers.

With the group being targeted as part of a U.S. campaign against Iran, wider Hezbollah influence could raise questions about Western aid to a country that hosts around 1 million registered Syrian refugees.

U.S. support for Lebanon’s army could also be in doubt.

Firas Maksad, director of The Arabia Foundation think tank in Washington, said the election had created a conundrum.

“You have election result that produced a more positive outcome for Hezbollah and its allies. These results need to be taken into consideration as the government is being put together,” he said.

But “trying to form a government that would prove unwelcome in Riyadh, let alone Washington … would come at a potentially steep cost for the country. Hariri is taking his time, and in many ways he is stuck.”

THE “WORST TIME” FOR A DELAY

Lebanon is used to lengthy cabinet negotiations. But the Western-backed Hariri and others gave reason to hope this time would be different because of a difficult economic situation. Politicians have warned of economic crisis.

The IMF wants to see immediate and substantial fiscal adjustment to improve the sustainability of Lebanon’s public debt, which stood at over 150 percent of gross domestic product at the end of 2017. A Paris donors conference in April yielded pledges of billions, conditional on reform.

The next government will also have to address relations with Syria, where President Bashar al-Assad is well on top in the seven-and-a-half-year-old civil war there. His Lebanese allies, led by Hezbollah, want full ties restored.

Political commentator Rajeh Khoury said it was “difficult to see a government in the foreseeable period, unless some strange surprise occurs”. Citing the economy, he said that the delay had come “at the worst time”.

The election reflected shifts in Lebanon and the wider region. The Hariri-led March 14 alliance, which won the majority in 2009, disintegrated after that vote. Waning Saudi support accelerated the alliance’s decline, as Riyadh’s focus switched to confronting Iran in the Gulf, not Lebanon.

Saudi ties with Hariri also deteriorated over compromises towards Hezbollah and its allies. These included the 2016 deal that made Christian leader Michel Aoun president and saw Hariri return as premier.

Their relationship hit a low last November when Hariri was detained during a visit to Riyadh and forced to resign. He returned to Beirut and retracted his resignation after French intervention.

DEAL COULD BE REACHED TOMORROW, OR IN “A YEAR”

The Hariris had been the dominant Sunni force in Lebanon since the 1975-90 civil war ended. But he lost more than a third of his seats in the last election, held under a new system.

Hezbollah allies gained at his expense. They included pro-Damascus politicians, some of whom returned to public office for the first time since Syria withdrew forces from Lebanon in 2005.

The one bright spot for Hezbollah opponents was an improved performance by the Christian Lebanese Forces (LF) party. It nearly doubled its MPs, closing the gap with the biggest Christian party, Aoun’s Free Patriotic Movement.

Reconciling the demands of the LF and the Aounists is one of the main problems. Another is Druze rivalry.

Walid Jumblatt, Lebanon’s main Druze leader and a former pillar of March 14, wants his party to control three cabinet seats allotted to the Druze. But Talal Arslan, a rival Druze politician and Hezbollah ally, wants one of these.

While Saudi Arabia remains less concerned with Lebanon than in years gone by, Maksad said it was probable Riyadh did not want to see the Lebanese Forces and Jumblatt marginalised.

“I don’t know if that was explicitly communicated – it might have been – but I think that would be a good assumption on the part of Prime Minister Hariri,” he said.

Additionally, Hezbollah’s newly elected Sunni allies want a slice of government. “The problems could be solved tomorrow, or in a year’s time,” said a third senior politician.