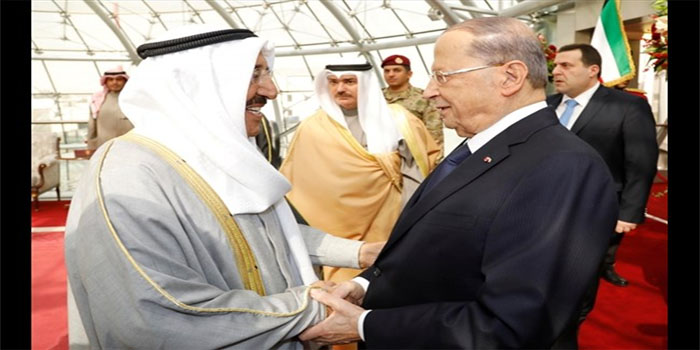 The Kuwaiti government will give additional aid to Lebanon to help stimulate the economy and respond to the country’s needs, Emir Sheikh Sabah al-Ahmad al-Sabah told President Michel Aoun during an official visit by the Lebanese president to Kuwait Tuesday. Sabah explained to Aoun that the economy care package would come from the Kuwait Fund for Arab Economic Development, as per a tweet from the presidency’s account.

Aoun’s visit to Kuwait was billed as being an attempt to revive Lebanon’s relationship with the Gulf country. He was welcomed by Sabah and an accompanying delegation upon his arrival. The president then headed to the Bayan Palace to discuss ways of boosting bilateral ties.

The two leaders agreed on the need for a unified Arab stance “in the face of Arab and regional developments because the unity of Arabs is primary in this case,” according to a statement from Aoun’s office. In March, an Arab League Summit to be held in Riyadh will be an opportunity to foster Arab unity, the statement added.

Both Aoun and Sabah reiterated condemnation of the recent U.S. decision to recognize Jerusalem as the capital of Israel. Aoun also lamented what he said was the United Nation’s inability to enforce its decisions.

The Syrian refugee crisis was also discussed, with Aoun stressing that the country’s large population of Palestinian refugees remained a burden on Lebanon. Sabah stressed his country’s support for Lebanon via direct aid or through support at international donor conferences. The Kuwaiti emir “said that his country’s presence in the Security Council could help Arab causes,” the statement read.

Aoun extended an invitation to Sabah to visit Lebanon, while the latter called for Kuwaitis to do so too.

This visit was originally scheduled in November, but the plan was postponed due to Prime Minister Saad Hariri’s shock resignation at the start of that month.

The president is scheduled to meet with senior Kuwaiti officials during his two-day visit.

As for the Abdali case, the Kuwaiti ambassador to Lebanon said the presence of Aoun and the ministerial delegation alongside General Security head Maj. Gen. Abbas Ibrahim is a positive step to reinforce ties between the two countries.

Ministerial sources have not ruled out that discussions in the Gulf nation might touch on the Abdali terror cell, allegedly linked to Hezbollah. The cell comprises several individuals accused of amassing weapons at the behest of Iran and Hezbollah for an attack in Kuwait.

In the summer of 2015 Kuwaiti security service officers raided farmhouses in Abdali near the Iraqi border, uncovering the largest illegal weapons cache to have been discovered in Kuwait’s history. The country’s Foreign Ministry sent a letter to its Lebanese counterpart requesting that the government act in accordance with the Kuwaiti judiciary’s rulings regarding the terror cell.

The Kuwaiti statement called on the Lebanese state to take responsibility regarding Hezbollah, given that the political wing of the group is an official actor in the government.

Aoun’s talks were expected to focus on the countries’ diplomatic missions, and Lebanon’s appointment of an ambassador to Kuwait. “Talks between Aoun and the Kuwaiti emir did not discuss the issue of the appointed Lebanese Ambassador to Kuwait Rayan Soueid,” one source familiar with the issue told The Daily Star. However, the same sources said the positive environment will bring a solution to the problem.

Sources said that Aoun’s trip to Kuwait at this time is a positive signal that ties between Beirut and its the Gulf are returning to normal.