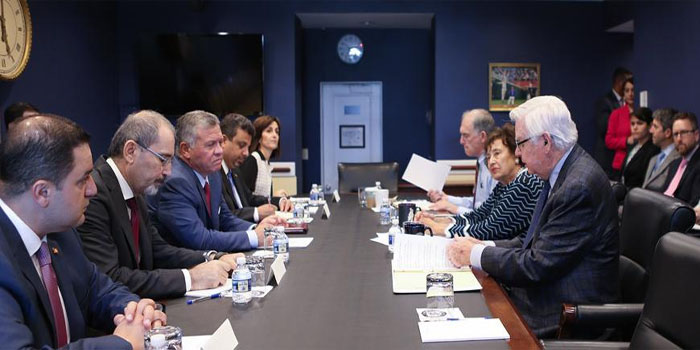 His Majesty King Abdullah on Tuesday held a number of meetings at the US Congress with the leaderships of the Senate and the House of Representatives, as well as the chairs and members of the House Committee on Foreign Affairs, and the House Appropriations Subcommittee on State, Foreign Operations and Related Programmes.

The meetings, partly attended by Her Majesty Queen Rania, covered the historical ties of friendship and strategic partnership between Jordan and the United States, as well as means to bolster cooperation in various fields, particularly in the economic sector, according to a Royal Court statement.

The meetings addressed the economic challenges Jordan is facing — the majority of which have been caused by regional crises — and means to overcome them through programmes to bolster Jordan’s economy, stimulate growth and generate more job opportunities for young Jordanians.

In addition, discussions touched on the great burden Jordan is shouldering as a result of the Syrian refugee crisis.

His Majesty expressed Jordan’s appreciation for the United States’ support for several development-related programmes and efforts to mitigate the burden of the refugee crisis, as well as the repercussions of other regional conditions, thanking Congress for its ongoing support for the Kingdom.

The King stressed that Jordan cannot take in more refugees, affirming that the Kingdom’s security and interests are the priority.

The Palestinian cause was the foremost topic of discussion among regional issues, with His Majesty underlining that reaching a just and lasting solution to the Palestinian issue will bring security and stability to the Middle East.

His Majesty stressed the need to push the Palestinian-Israeli peace process forward, based on the two-state solution, international law and relevant UN resolutions, leading to the establishment of an independent Palestinian state with East Jerusalem as its capital, living side by side with Israel in peace and security.

The subject of Jerusalem, the King underlined, must be settled as a part of the final status issues, on the basis of the two-state solution.

Moreover, discussions at the meetings covered the role of UNRWA and the importance of supporting the UN agency to maintain its educational, health and relief services for Palestinian refugees.

Developments related to the Syrian crisis were also discussed, as well as the importance of reaching a political solution and preserving stability in the de-escalation zone in southwestern Syria, which was established last year under a Jordanian-US-Russian agreement.

Other issues discussed included crises in the Middle East, and regional and international efforts to fight terrorism within a holistic approach.

Members of the House Committee on Foreign Affairs, and the House Appropriations Subcommittee on State, Foreign Operations and Related Programmes said they always look forward to hearing  from His Majesty on various regional and international issues.

They expressed keenness to build on Jordan’s strong partnership with the United States, voicing support for the Kingdom’s important role in seeking security and stability in the region.

The US lawmakers also praised the King’s leadership and ongoing efforts to secure the welfare of Jordanians and other peoples in the region.

They described Jordan as a unique model in hosting refugees that others can learn from.

In a press interview after the meetings, Congresswoman Ileana Ros-Lehtinen (R-Florida), who chairs the House Foreign Affairs Subcommittee on Middle East and North Africa, said: “Jordan is a voice of stability and civility in a very troubled region.”

“The United States wants to make sure that we stand by our friends and the Kingdom of Jordan has been our friend,” she added, noting that “Jordan is a strong reliable partner for peace”.

“Every time that His Majesty comes… he comes with a breath of fresh air and tells us that there is hope, there is light at the end of the tunnel,” Ros-Lehtinen continued, pointing to Jordan’s ability to navigate the pressures caused by regional conditions.

She also stressed the importance of helping Jordan deal with economic challenges.

Congressman Michael McCaul (R-Texas), who chairs the House’s Homeland Security Committee and is also a member of the House Foreign Affairs Committee, said Congress is always interested in hearing the King’s insight on issues related to foreign policy and how to deal with conditions in the region.

For his part, Congressman Adam Schiff (D-California), who chairs the Friends of Jordan Caucus in the US Congress, said: “The relationship between the United States and Jordan has always been of vital importance to both countries”, noting the importance of His Majesty’s visit to Washington, DC, and his Capitol Hill meetings in providing insight into what is going on in the region, which “helps guide us in our policy making”.

On Monday, His Majesty met with US Vice President Mike Pence and discussed with him means to bolster the strategic partnership between Jordan and the United States.

At the meeting, which was attended by Queen Rania and Second Lady Karen Pence and continued over dinner held in honour of Their Majesties and the accompanying delegation, discussions covered crises and issues in the Middle East and efforts to reach political solutions to end them.