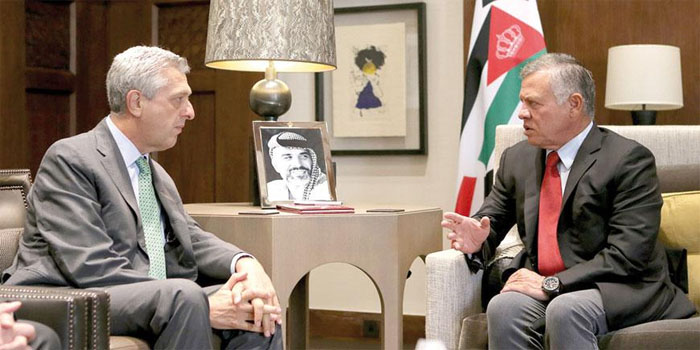 His Majesty King Abdullah on Monday met with UN High Commissioner for Refugees (UNHCR) Filippo Grandi over means of cooperation between the Kingdom and the agency in providing services to refugees and meeting their needs.

The meeting, held at Al Husseiniya Palace, focused on the “immense burdens caused by the Syrian refugee influx on the Jordanian economy and the increasing pressures on service sectors, mainly the health, education and infrastructure”, according to a Royal Court statement.

King Abdullah stressed the importance for the international community to bear its responsibilities towards countries hosting Syrian refugees, especially Jordan, calling for more coordination between Amman and UNHCR to rally the necessary support for refugees and host communities.

For his part, Grandi “praised the pivotal role played by Jordan in presenting humanitarian and relief services to refugees, stressing the agency’s keenness to sustain coordination and cooperation with the Kingdom in a way that helps mitigate the repercussions of the Syrian refugee influx”, the statement said.

Foreign Minister Ayman Safadi and Adviser to His Majesty and Director of the Office of His Majesty Manar Dabbas attended the meeting.

In a separate meeting on Monday, Safadi and Grandi discussed the current Syrian refugee crisis.

The two officials exchanged views on mobilising the international community to support the agency’s efforts and secure Jordan’s needs in light of the crisis.

Safadi underlined the importance of maintaining the vital services provided to refugees.

He also warned of negative implication of the drop in international support and its ramifications for Jordan.

It was announced last month that funding for the 2018 Jordan Response Plan, aimed at helping the Kingdom overcome challenges ensuing from the Syrian crisis, had only reached around 7 per cent of the required amount for the year.

Funding requirements for the 2018 plan stand at $2.517 billion, but total funding reached only $183 million or 7.2 per cent of the total amount required by July, according to figures released by the Jordan Response Platform for the Syria Crisis.

The refugee crisis is already casting a long shadow on the economy, Safadi explained, especially with regards to basic services like healthcare and education.

The shortage in funding, however, will reflect on the quality of these services, also provided to 1.3 million Syrians in Jordan, he noted.

Cooperation must continue between Jordan and the UNHCR to secure the funds needed to sustain these vital sectors, Safadi reaffirmed.

Jordan encourages voluntary return of Syrians to their native country, he stated.

It is inevitable, Safadi said, and all parties must come together to facilitate the process.

To that, Grandi reasserted the importance of the agency’s partnership with Jordan.

Joint efforts are crucial to the mission at hand, according to Grandi, who commended Jordan’s “indispensible humanitarian role”, the statement said.