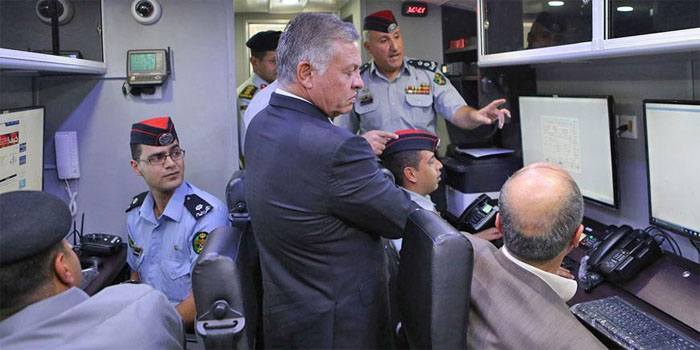 His Majesty King Abdullah, the Supreme Commander of the Jordan Armed Forces-Arab Army, on Monday visited the Civil Defence Department (CDD), where he checked on various services the CDD provides to citizens in all fields.

During a meeting with the CDD Director General Maj. Gen. Mustafa Bazaiah, the King underscored the importance of sustaining the development of the department to enable it to keep pace with the latest developments in civil protection, according to a Royal Court statement.
His Majesty also expressed his pride in the advanced level reached by the CDD personnel while performing their duty.

King Abdullah listened to a briefing by Bazaiah about the CDD’s future plans aimed at further developing the department and enhancing its performance.

The vehicle also features monitors displaying actions on the ground taken by drones and installed cameras on the vehicle, which would further facilitate following up on major road accidents.