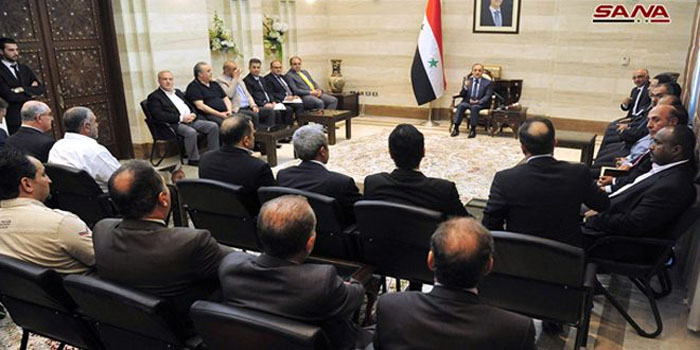 Prime Minister Imad Khamis met on Monday a number of representatives of companies and businessmen participating in the ongoing edition of Damascus International Fair.

The meeting featured companies from Arab and foreign countries representing the public and private sectors.
During the meeting, the participants exchanged views on the Fair and the ideas and proposals to clear any obstacles related to remittances, shipping, fees and the transfer of products, goods and raw materials from Syria to other countries, as well as the competitiveness in exporting products.

For his part, Khamis presented the government’s strategy to activate national economy and investment environment in Syria during the next phase based on a modern legislative structure including a new investment law, a law of partnership and an enhanced vision for exhibitions and exportation through financial and banking facilities and productive incentives.

He pointed out that the government floated 50 infrastructure projects in Syria for partnership, adding that work is underway to develop the executive procedures of simplifying procedures and re-running the institutions of public and private sectors.