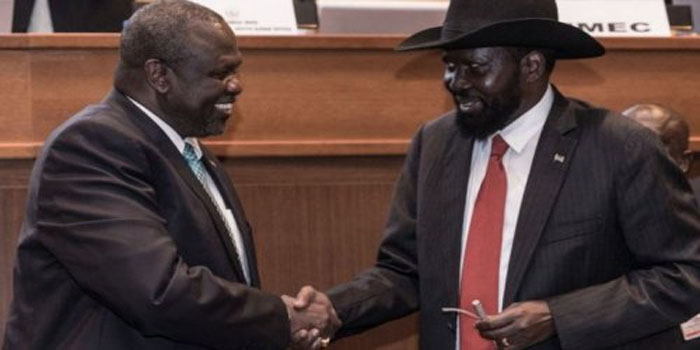 The deputy chief of staff of the Joint Monitoring and Evaluation Commission (JMEC) Friday urged South Sudanese to be united and build the war-ravaged country stressing there are no beneficiaries to the five-year conflict.

Thomson Fontaine made his call during the celebration for UN International Day of Peace at the Nyakuron Cultural Centre in Juba, in presence of the South Sudan Vice President James Wani Igga.

“As we celebrate the International Day of Peace, may we all embrace the spirit of togetherness and agree that there are no beneficiaries to the conflict,” said the Dominican diplomat who is now acting head of the monitoring body after the resignation of Botswana’s former President Festus Mogae.

“When millions of people are living in refugee camps in neighbouring countries, we are all affected. Conflict benefits none and erodes the good and hope in all of us,” he further said.

South Sudanese leaders will gather in Khartoum on Saturday ten days after signing the final peace document on 12 September 2018, following an unprecedented revitalization process negotiated under the direct supervision of the IGAD leaders who played the mediators.

Fontaine recalled that full compliance to the revitalized agreement is crucial to creating a conducive environment for a successful implementation of the peace agreement and economic recovery.

The international official who was picked for the job by the Troika countries said that JMEC is committed to fully discharge its mandate to vigorously monitor and evaluate the implementation of the signed deal.

“It is our view that this is the last best chance for a comprehensive peace and the IGAD Council of Ministers should stand ready to deal conclusively with those who would attempt to once again derail the peace and drag the country back into conflict”, he emphasized.

The international community cautiously welcomed the signing of the revitalized deal saying the parties this time have to prove their seriousness and commitment to enforce before to provide any support for its implementation.

Also, they required the region to directly confront the violators of the signed agreement including the South Sudanese government.