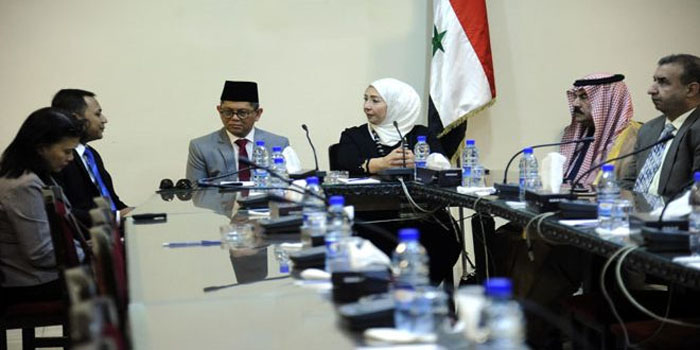 The Syrian-Indonesian Friendship Association at the People’s Assembly discussed with Indonesian MP Tawfiq al-Hadi means to strength the parliamentarian relationships between the two countries.

The head of the Association Fatima Khamis thanked all the countries that stood up by Syria in its war against terrorism, asserting the importance of having delegations visit Syria in order to relay the truthful facts that they witness to the public opinion.

For his part, al-Hadi stressed that Syria is a friend to Indonesia and that they share historical relations, pointing out to the possibility of his country’s participation in the reconstruction process in Syria.

“We believe in the wisdom of President Bashar Al-Assad and in the Syrian people’s confidence in him. The majority of the Indonesian people knows what is going on in Syria and support the Syrian government,” he said, hoping that Syria will emerge from the crisis as soon as possible.