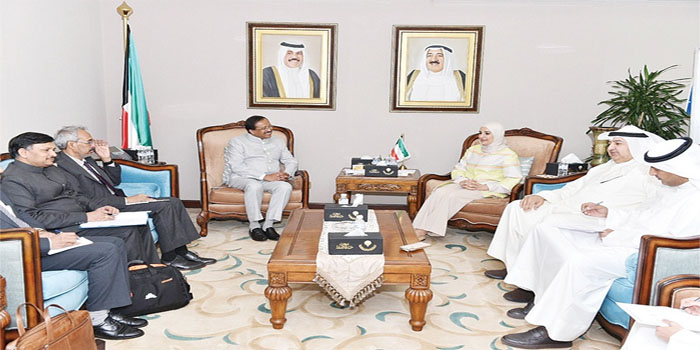 The Indian minister who arrived in Kuwait on Saturday on a two-day visit also met with and the Minister of State for Economic Affairs Mariam Al-Aqeel. Addressing the Indian community during a community reception hosted by the Indian embassy at Millennium Hotel on Saturday, the minister said as the largest expatriate community in the region, Indians have represented their country very well in the Gulf. The minister said Kuwait has become an adopted home for more than 100,000 Indians. “As the largest expat community, the people and the government of the state of Kuwait have a special place in our hearts. No wonder, India’s relations with Kuwait have transformed over the years to a multi-faceted partnership, encompassing the entire gamut of bilateral issues such as economy, energy, infrastructure, security, defense and education, among others,” he said.
“However, our greatest strength has been and will be the ‘great connect’ that exists between our Kuwaiti brothers and sisters with us. We deeply value and cherish this relation and we should enhance it further,” he said. The minister said the Narendra Modi government acknowledges the contribution being made by the non-resident Indian community and the positive image the community has built for India abroad.
“Over the last five years, the government has been seeking to reach out to the Indian diaspora. Recalling Prime Minister Modi’s recent visit to Bahrain, he said it was the first-ever visit by an Indian prime minister to Bahrain. Muraleedharan said the India government has set an ambitious goal to transform India into $5 trillion economy which is currently a $2.82 trillion economy. He beckoned all Indians to join the government in transforming the country into a resurgent India.

The India government has opened a one-stop resource center at Pravasi Center in New Delhi to help Indians overseas. It has also opened 300 new passport offices to make the processing of passports more easier and less cumbersome. The minister informed that the government will soon begin to issue Aadhhar cards to NRIs on their arrival in India. The minister said he is aware of the problems being faced by the Indian engineers in Kuwait as wells as the issues of nurses. “We are constantly pursuing the matter and we will continue to do so until the problems are resolved,” he said.

Earlier, in his welcome remarks, Ambassador Jeeva Sagar underscored the deep-rooted bilateral relations between Kuwait and India saying, “We want to further expand and strengthen the bilateral relations between the two countries through such high-level visits.” He recalled the high-ranking visits of former External Affairs Minister late Sushma Swaraj, former ministers of state for External Affairs Dr V K Singh and M J Akbar to Kuwait in the last two years. The visiting minister interacted with the representatives of the Indian community members following during the reception. Muraleedharan wound up his two-day visit yesterday.