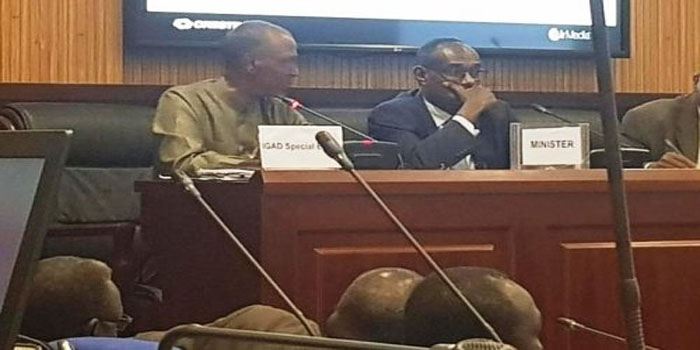 The IGAD Special Envoy for South Sudan has formally transmitted the concern of the South Sudanese opposition groups to the Ethiopian Foreign Minister Workneh Gebeyehu who is the chair of IGAD Council of Ministers, in order to discuss it during the upcoming meetings of the IGAD meetings.

After a meeting with President Omer al-Bashir, the SPLM-IO and South Sudan Opposition Alliance initialled the final document of the peace agreement pointing the Sudanese leader pledged to refer their reservations and demands to the IGAD leaders to take a decision on it. Further, they warned they would not sign the final agreement unless these matters are addressed.

“As we celebrate this important milestone, it is Important that I bring to your attention and the attention of the Council of Ministers unresolved issues that will require your collective attention and guidance. These Issues as raised by both SPLM/SPLA (IO) and SSOA,” said Wais Ismail in a letter seen by Sudan Tribune dated on 31 August 2018 addressed to Minister Gebeyehu with a copy to the Sudanese foreign minister and the parties to the peace process.

The submission of the unresolved issues means that they will be debated by the Council of ministers and recommendations on this respect will be made to the meeting of the IGAD heads of states and government.

The four issues are the number of states and demarcation of the tribal and state boundaries, the quorum of the meetings of the parliament, council of ministers. and state and local governments, the procedures of the permanent constitutional-making process.

The two opposition groups also requested that Kenyan and Ethiopian armies join the Sudanese and Ugandan armies as part of the IGAD troops to be deployed in South Sudan to help create a conducive environment for the implementation of the revitalized agreement.

The IGAD Council of Ministers will meet on Tuesday 11 September.