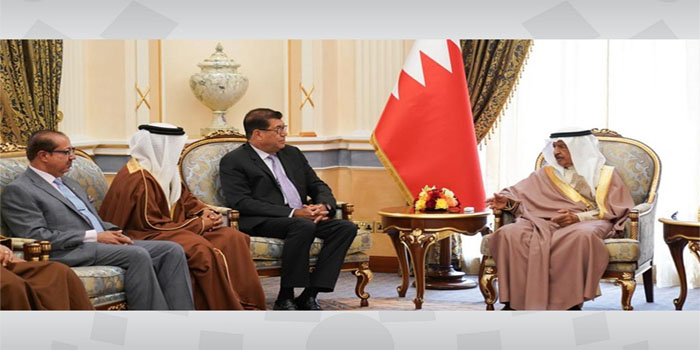 His Royal Highness Prime Minister Prince Khalifa bin  Salman Al Khalifa has affirmed that Saudi Arabia, under the leadership of the Custodian of the Two Holy Mosques King Salman bin Abdulaziz Al-Saud, has succeeded in enhancing the status of the Nation and making it more influential in the regional and international decision-making process.

“Saudi Arabia is the pillar and backbone of stability in the region, and its stances will always bear witness to the highest sense of fraternity and the common destiny that brings us together,” he said, adding that “all words of thanks would not give due credit to Saudi Arabia. We pray to Allah the Almighty to ensure the success of the efforts of the Custodian of the Two Holy Mosques to serve the Arab and Islamic nations.”

HRH the Prime Minister stressed that Allah the Almighty has blessed Saudi Arabia with a great distinguished status among Arab and Islamic peoples, and therefore its efforts to safeguard regional security and stability should be supported, in light of the current situation the Arab and Islamic nations are going through, and require more unity and solidarity.

HRH Premier made the statements while receiving, at the Gudaibiya Palace today, the Saudi Foreign Minister, Dr. Ibrahim bin Abdulaziz Al-Assaf, and his accompanying delegation, who are currently on a visit to the kingdom to sign the minutes of the establishment of the Bahraini-Saudi Coordination Council.

HRH Premier welcomed the Saudi minister’s visit, which, he said, reflects the depth of the love and fraternity between the two countries.

HRH the Prime Minister wished the Bahraini-Saudi Coordination Council every success, noting that it will strengthen joint coordination on various issues that would bolster bilateral relations.

The Premier said that the Bahraini-Saudi relations are based on a long history of love, and are becoming stronger thanks to the distinguished relations between their leaders and peoples.

The Prime Minister affirmed that Saudi Arabia’s supportive stances towards Bahrain’s security, stability and development process are widely appreciated by all Bahrainis, adding that the security and stability of Bahrain and those of Saudi Arabia are indivisible and integral.

The Saudi Foreign Minister expressed sincere thanks and appreciation to HRH Premier for his interest in enhancing bilateral relations, noting that the Prime Minister enjoys love and appreciation in Saudi Arabia for his wisdom and vision aimed at achieving the best for the region’s countries and peoples.

He highlighted the deep-rooted distingusihed relations between the two brotherly countries, stressing his country’s keenness to strengthen cooperation with Bahrain to serve the interests of the two kingdoms and their peoples.