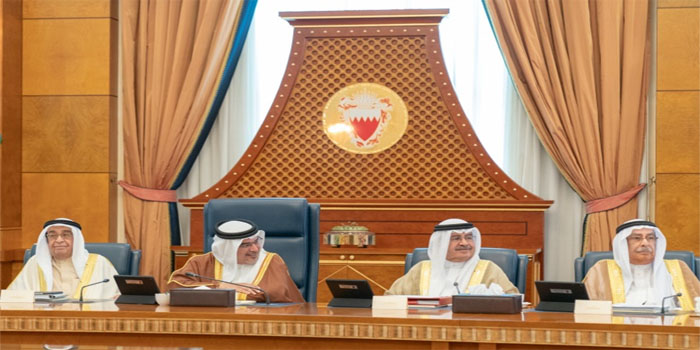 The Cabinet strongly condemned the attack that occurred at the Bahraini Embassy in Baghdad, describing it as a violation of the most basic diplomatic rules and norms, and a contravention of all international conventions and treaties.

The Cabinet expressed gratitude for the measures taken by the government of the Republic of Iraq to provide the necessary protection needed for embassy staff. The Cabinet also noted the strong relationship shared by Bahrain and Iraq, and the importance of further strengthening these relations to support the interests of both countries.

The Cabinet went on to express its gratitude and appreciation to both the Shura Council and the Council of Representatives for their solid stances while addressing media campaigns that have targeted the Kingdom of Bahrain in an attempt to encourage social discord. The Cabinet added that these malicious attempts will not succeed in dividing the Kingdom, and praised the Shura Council and Council of Representatives, noting their awareness and response to these abhorrent acts reflect the national responsibility and shared values of all Bahraini citizens.

Later, the Cabinet praised the Isa Award, named after HH the late Amir of Bahrain, Sh. Isa bin Salman Al Khalifa, and established by HM the King, for its internationally recognised success and noble work in the service of humanity.

In this regard, the Cabinet expressed gratitude to the Isa Award Board of Trustees, headed by the Deputy Prime Minister, HH Shaikh Mohammed bin Mubarak Al Khalifa, and its jury committee for their tireless efforts and commitment to the award’s success. The Cabinet congratulated the Edhi Foundation, located in Pakistan for winning this year’s Isa Award, wishing the foundation continued success in their humanitarian and charity work.

1. In line with the directives of HM the King to review the mechanisms of applying various fees over various services, and noting the importance of taking into account the needs of citizens, the Prime Minister, HRH Prince Khalifa bin Salman Al Khalifa directed on the cancelation of fees for 200 government services, across 10 government entities. HRH the PM also directed the exemption of 220 additional government services from VAT, increasing the number of VAT-exempt government services to 1620.

The Cabinet commissioned the Minister of Finance and National Economy to coordinate with the responsible government entities to ensure they take the appropriate administrative and legal actions needed.

The initiative is in line with the government’s efforts to provide facilities to its citizens and increase the competitiveness of the national economy, while enhancing its ability to attract investments by reducing administrative costs and fees in line with the goals of the Fiscal Balance Program.

The Minister of Finance and National Economy provided a detailed presentation on two MOU’s submitted to the Cabinet regarding this issue.

2. HRH the Crown Prince issued directives to further improve operational efficiency in the public sector in order to ensure the delivery of government services continues at the highest standards.

HRH the Crown Prince reviewed the Q1 2019 performance indicators of the National Suggestions and Complaints System ‘Tawasul’, which highlights the overall improvements made by the government’s customer service providers. 93% of total submissions to 37 public entities have been resolved in line with the service level agreement – 19 public entities have responded to 99% of total submissions within the service level agreement.

3. The Cabinet reviewed the Multilateral Competent Authority Agreement on the Exchange of Country-by-Country reporting, in line with the Kingdom of Bahrain’s recognition of the OECD’s Inclusive Framework on Base Erosion and Profit Shifting (BEPS), and the Convention on Mutual Administrative Assistance in Tax Matters.

4. The Cabinet discussed the benefits of volunteering, emphasising the practical skills the Bahraini youth can gain from such experiences.

In this regard, the Cabinet referred a memorandum submitted by HE the Minister of Youth and Sports to the Civil Service Council on volunteer works for further study.

5. The Cabinet approved a Memorandum of Understanding (MOU) between the Kingdom of Bahrain’s Al Areen Wildlife Park and Reserve and the United Arab Emirates’ Al Ain Zoo. The MOU establishes a framework for the exchange of information in the field of wildlife and environmental conservation.

The approval of the memorandum follows the recommendations of the Ministerial Committee for Legal and Legislation Affairs.

6. The Cabinet approved a proposal to develop the intersections in Al Mahzoura Street, Riffa, as part of the Kingdom’s strategic road network plan, designed to further improve the flow of traffic across the Kingdom.