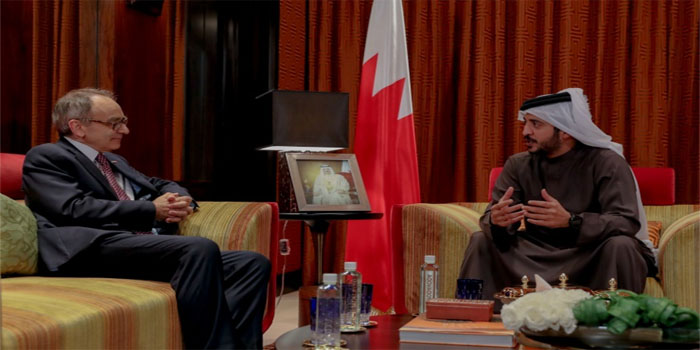 First Deputy Chairman of the Supreme Council for Youth and Sports (SCYS) and President of Bahrain Olympic Committee His Highness Shaikh Khalid bin Hamad Al Khalifa praised deep-rooted historic relations of more than 200 years between Bahrain and the UK. He stressed perpetual growth of bilateral relations mainly in the sport field.

HH Shaikh Khalid was speaking as he received at Al-Wadi Palace British Ambassador to Bahrain Simon Martin. He discussed with him development of the Mixed Martial Arts (MMA) sport in Bahrain and the UK and reviewed ways of further developing it in both countries.

HH Shaikh Khalid pointed out his directives to hold BRAVE Championship in the British capital, London, on July 25, describing the step as a means to further boost bilateral relations mainly in the sport sector. He noted that organising the championship in London will endow it with more success given the great care accorded by Britain to this sport.

The British ambassador lauded the tremendous efforts made by HH Shaikh Khalid to enhance the Bahraini-British relations mainly in the sport field. He hailed holding BRAVE 24 in London which, he said, will have a clear impact on development of MMA sport in both countries.