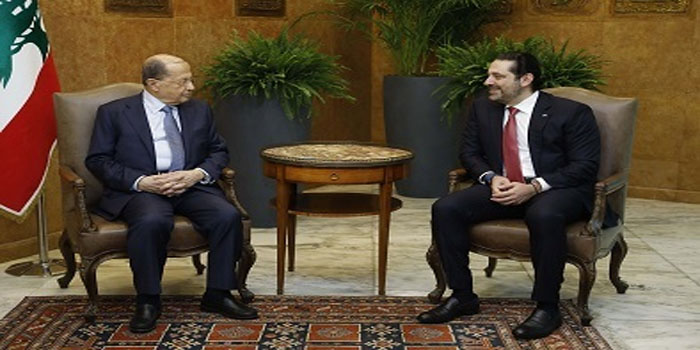 Prime Minister Saad Hariri met with President Michel Aoun after Thursday’s cabinet session as part of his ongoing efforts to resolve the latest spat between the president and Speaker Nabih Berri.

“Talks tackled several issues, including solutions for the issue of decrees, and efforts are being exerted in this regard,” said Hariri after meeting Aoun in Baabda.

Aoun is engaged in a spat with Berri over a controversial decree granting one-year seniority to a number of officers.

After the decree was signed by Aoun and Hariri, Berri and Finance Minister Khalil insisted that the decree should have also carried the finance minister’s signature.

Aoun and his aides have argued that the decree did not require Khalil’s signature because it did not entail any “financial burden,” a point Berri and officials close to him have argued against.

Ain el-Tineh sources have meanwhile warned that the decree would tip sectarian balance in favor of Christians in the army’s highest echelons.

The officers in question were undergoing their first year of officer training at the Military Academy when Syrian forces ousted Aoun’s military government from Baabda in 1990. They were suspended by the pro-Damascus authorities until 1993 before they resumed their officer training course as second-year cadets.