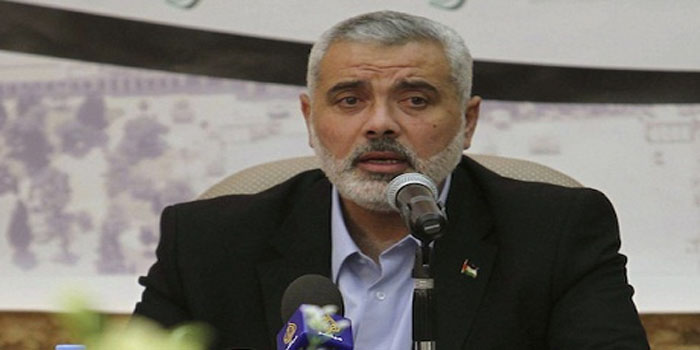 The Head of the Political Bureau of the Palestinian Hamas movement Ismail Haniyeh told Egypt’s Intelligence Chief Abbas Kamel in a phone call on Thursday that the group accepts an Egyptian proposal for reconciliation between Hamas and the Palestinian Authority, according to a statement issued by Hamas.

The Egyptian Paper was presented to the Palestinian movement after in-depth talks between Egyptian officials and a Hamas delegation during its visit to Cairo last week.

The delegation was headed by Saleh Al-Arouri, deputy head of the Hamas political bureau.

The statement highlighted that Hamas accepted the proposal as it appreciates the current exceptional circumstances on the Palestinian front, and the serious attempts made against the Palestinian cause, especially on the issues of Jerusalem and refugees.

During the phone call, Haniyeh and Kamel discussed the latest developments in the Palestinian issue, especially reconciliation and humanitarian projects for the people of Gaza as well as the recent Israeli escalations against Palestinians in the Strip.

Haniyeh expressed his appreciation for the “positive spirit” that prevailed during the talks between Kamel and the Hamas delegation last week, and affirmed the group’s readiness to cooperate in all areas.

The Egyptian Proposal for reconciliation included the lifting of all Palestinian Authority (PA) penalties on Gaza and the full payment by the PA of salaries and budgets in the strip; the commitment by Hamas not to interfere in the work of the national reconciliation government as well as cooperation with it; the provision of fuel without taxes for the operation of the electric power plant under the supervision of the government; and the start of consultations in a month time to form a national unity government, which includes all Palestinian factions under the programme of the Palestine Liberation organization.