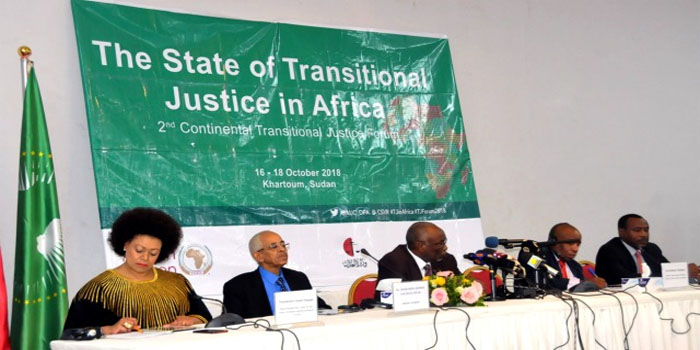 Forum held in Khartoum during the period 16 – 18 October 2018 under the theme “The State of Transitional Justice in Africa.”
VP Kibir reiterated the call for the opposition leadership in general to benefit from the opportunities availed to join the peace process and democratic transformation through the peaceful means.
He added that the government is committed to its announced unilateral ceasefire along with cooperation with the international and regional organization to provide the humanitarian assistance to the war-affected areas.
Kibir said that Sudan has passed two experiences which contributed in promoting the justice, truth and reconciliation procedures which will be deliberated during this forum for legal drafting and implementation by the African Union.
He pointed out to the democratic transformation in the country which resulted to bringing Sudan out of the special procedures in human rights, affirming the seriousness of Sudan in cooperation with human rights and regional mechanisms including the roadmap to achieve peace in Sudan.
Vice President, Kibir said the firearms collection campaign has contributed to stability and security, pointing out that it is a unique experience as it was implemented peacefully and without any loses in lives or properties.
He lauded the African Union’s stances towards the so-called International Criminal Court (ICC) calling the forum to stand on the fair justice in Sudan.
For his part, AU Commission Political Affairs official, Prof. Khabele Matlosa lauded the efforts exerted by Sudan in achieving the transitional justice represented by the national dialogue experience and achieving peace in Darfur.
He pointed to the challenges facing the African continent represented by wars and armed conflicts which led to the mass displacement and instability in some parts of the continent a matter that necessitate the establishment of this mechanism to achieve justice and peace in Africa.
He called on the member states to adapt the transitional justice to be ratified by the AU Commission.
For his part, Minister of Justice, Salim Ahmed Salim affirmed Sudan concern on the transitional justice considering justice as an ethical and social value, pointing out to the national dialogue experience and the preparation for the permanent constitution.
He affirmed that the forum represents an opportunity to recognize Sudan’s experiences in the transitional justice, affirming Sudan support to the recommendations of the forum.