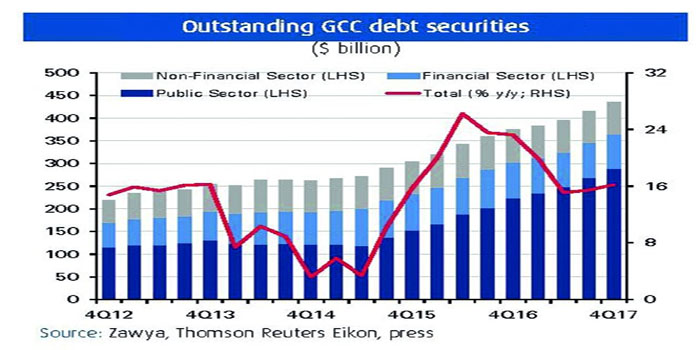 Synchronized global growth, on the other hand, ushered in tighter credit and monetary conditions.

NBK Group noted in its  GCC debt market research note that GCC benchmark yields maturing in 8-9 years were mixed, with some little changed while others saw their risk premium shrink significantly.  Movement was first dictated by the weakness in commodity prices and later by regional tensions.

However, the relative success of GCC fiscal reforms, the extension of the Opec deal, and the modest impact of the Qatari diplomatic crisis helped contain a climb in yields.

Most GCC central banks followed the Fed, raising key policy rates by 25bps three times, with Oman and Kuwait being the exceptions. The moves were in line with the need to support USD pegs. Oman’s Libor-linked repo rate crept gradually higher over the year. Kuwait passed twice on hiking its lending policy rate, but did hike the repo rate, seeking to protect the currency without hurting domestic credit growth.

Gross GCC issuance (public and private) crossed $100bn for the second year in a row, supported by robust sovereign activity. Indeed, public sector debt issuance (central government plus related firms) accounted for $84bn of all new debt in 2017, $50bn of which was international sovereign debt, a regional record.

Meanwhile, private sector issuance eased to $16bn, down $4bn, but remained strong, on the back of healthy non-financial sector activity.

Total outstanding debt increased by 16 percent, to $436bn.  Supported by adequate global funding conditions, total international GCC sovereign borrowing covered close to 50 percent of government financing needs and was sought after by international investors. Issuance was led by Saudi Arabia, with a $12.5bn bond and a $9bn Sukuk, followed by Abu Dhabi’s $10bn offering, and then Kuwait’s $8bn bond, its first.

Meanwhile, Oman and Bahrain issued $7bn and $3bn, respectively. These issues were all well received, each on average oversubscribed three to five times in spite of credit downgrades, reflecting the overall strong attractiveness of GCC debt.

The perceived riskiness of investing in the region also dropped in 2017 on reduced austerity and stronger commodity prices. CDS rates were down for most tracked sovereigns, declining by between 5 and 30 bps, with Dubai experiencing the strongest jump in confidence. With the aggregate GCC fiscal deficit estimated at $74bn in 2018, the outlook for regional debt is expected to remain healthy. Oman has already tapped international markets for $6.5bn and other sovereigns are expected to soon follow.

However, the gradual tightening of global monetary policy, notwithstanding possible delays due to subdued inflation, and the volatility of oil prices may weigh negatively on regional funding conditions.