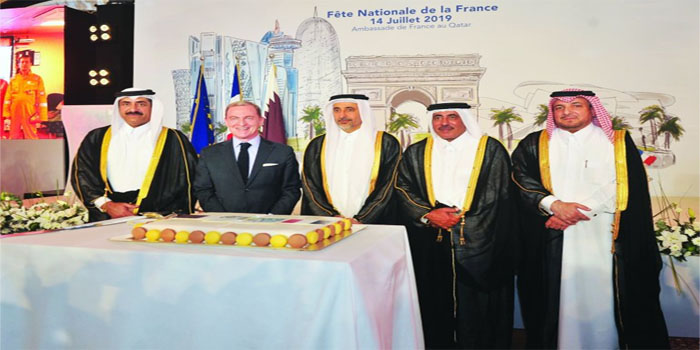 The Embassy of France celebrated on Sunday the National Day of France in the presence of a number of Qatari dignitaries, officials, diplomats and other guests.

“A year ago, when I took office in Doha, Deputy Prime Minister and Minister of Foreign Affairs, H E Sheikh Mohamed bin Abdulrahman Al Thani said to me with in lighter vein while welcoming me, ‘I pity you very much, Mr Ambassador because the bilateral relationship is already so excellent that you have little chance of taking them to higher level”, the Ambassador of the French Republic to Qatar, Franck Gellet remarked during  the National Day reception held at the Ritz-Carlton Hotel.

“H E the Deputy Prime Minister’s jest was obviously a way to encourage both of us to keep our two countries going further and further together. And that, I believe, is what they have done, faithful to each other in keeping the promises of everything that bound them even before Qatar’s independence,” Gellet added.

“France, for its part, has remained all the more committed as it perfectly measures the challenges that Qatar, its friend, its partner and its ally, has been facing for two years: in such complex circumstances, it would not act any differently than Qatar, which rightly intends to maintain control of its policies by giving itself all the means of its independence, in an unsettling and uncertain regional moment. And France understands this all the more as it applies this same course of action to itself,” the Ambassador noted.

He also said that France will always be happy to support Qatar in its ongoing autonomisation, which includes diversifying its economy and opening up Qatari talents to all disciplines.

The Ambassador said that France has provided the Rafale aircraft — the best plane of its generation — which will support Qatar more to defend its sovereignty, adding that there are  5,500 French citizens in Qatar who are giving their best in the service of friendship between both countires and their gratitude for the warmth of your hospitality.