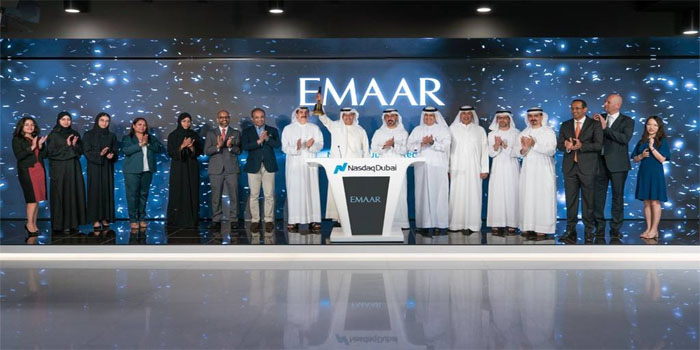 Emaar Properties on Monday announced it has listed a $500 million sukuk on the Nasdaq Dubai with the company’s chairman Mohamed Alabbar celebrating the listing by ringing the exchange’s opening bell.

The 10-year sukuk, which is part of Emaar’s $2 billion bond issuance programme, has an annual return rate of 3.875%, according to a press release.
The company aims at bolstering its regional and international expansion plans via the capital raised, Emaar noted.

Mohamed Alabbar said: “The growth of the sukuk market has been tremendous and has helped bridge the gap in infrastructure financing particularly with projects linking to the real economy. Listing our Sukuk on Nasdaq Dubai provides our issuance with a well-regulated platform with high visibility and close links to market participants regionally and around the world.”

For his part,: “This listing by Emaar Properties underlines the strong activity that we are seeing in the Sukuk sector, with listings so far this year on Nasdaq Dubai from UAE and overseas issuers valued at a total of 8.85 billion US dollars,” chairman of Nasdaq Dubai Abdul Wahed Al Fahim said.

Moreove, Hamed Ali, CEO of Nasdaq Dubai stressed that the exchange would reinforce collaboration with the Emaar to support its financing activities and position as “one of the UAE’s most dynamic and prominent enterprises”.

“As one of the world’s largest exchanges for Sukuk listings with a total nominal value of 58.7 billion US dollars, with 55% of that value coming from non-UAE issuers, we are preparing for further listings from a range of regional and international public and private sector issuers,” Ali added.

On 17 September, Emaar Properties revealed it had signed the final terms of issuing $500 million trust certificates that have an annual return of 3.875% and will be matured in 2029.